Nick Saban Is Being Tested for the Virus. The Runaway Train of College Football Keeps Rolling. – The New York Times

Nick Saban Is Being Tested for the Virus. The… 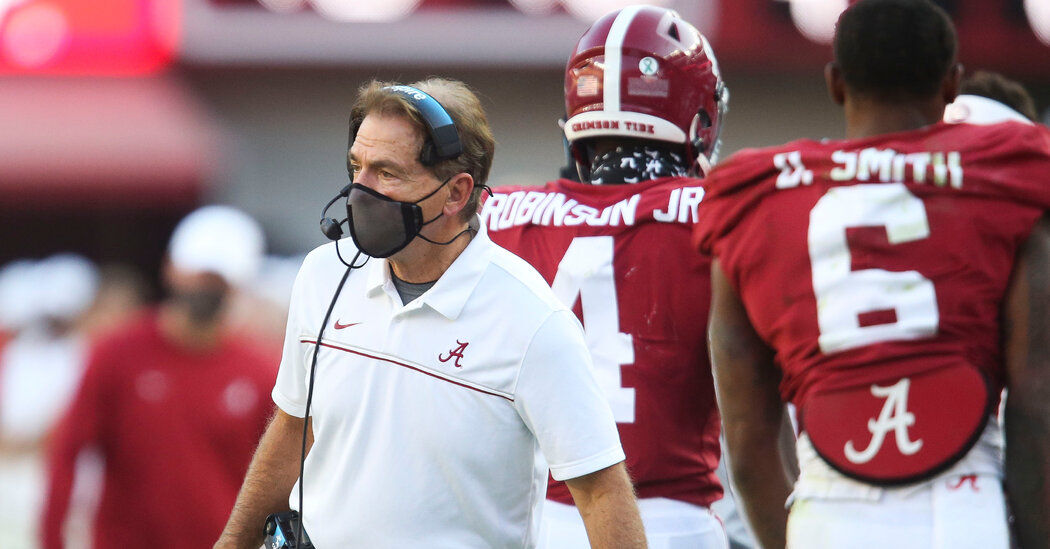 The news that Alabama Coach Nick Saban tested positive this week for the coronavirus gave an uppercut jolt to big-time college football, which is doing all it can to continue with its season — pandemic be damned.

What will the jolt change?

So far, after announcing the positive test, Saban has said he feels fine. “I’m not really concerned that much about my health,” he told reporters in a Zoom call from the isolation of his home.

On Friday, Alabama said Saban had tested negative in a follow-up examination. If he clears two more tests and still shows no symptoms, he could be allowed to coach on Saturday when his team plays Georgia.

This, of course, is a disease shrouded in uncertainty. Saban is 68 years old, an age that makes him particularly vulnerable should he fall ill. But no matter what happens, nothing that has transpired this week in Tuscaloosa will faze major college football, which keeps twisting itself into knots, straining to rationalize playing games amid a pandemic that has led to at least 217,000 deaths in the United States so far.

Even with infection possibly hitting its most famous coach, the mind-set of the college game’s most vigorous enablers has not altered. They are bent on moving forward.

Just look at how this season is unfolding.

We’ve got teams playing on campuses that are seeding outbreaks in cities, regions and towns. Tuscaloosa, the University of Alabama’s home, is just one of them. None of that matters to those who would grasp for any rationalization just so they can have some college football.

Move on, they say. Go ahead and play.

We’ve got teams traveling state to state on buses and planes. Teams staying in cramped hotels. Teams gathering in the tight confines of visitor locker rooms.

In its third game of this season, the Crimson Tide rolled into Oxford to play Mississippi. Saban, who regularly wears a mask and is known to be a stickler when it comes to protecting against the virus, suggested that he might have been exposed to the virus during that trip.

With their sprawling counts of players, coaches and support personnel, the movement of college teams around the country for games every week doesn’t exactly help slow down the virus. But to the enablers, the excuse makers, those who want to normalize sickness, that does not mean much.

Move on, they say. Move on.

Even if it means holding games in front of frothing crowds. After his team lost to Texas A&M last weekend, Florida Coach Dan Mullen said the boisterous crush at College Station had been a significant factor in the defeat. So he promptly called for 90,000 Florida fans to show up for the Gators’ next game at home in Gainesville, against Louisiana State.

Then came karma. Florida reported this week that at least 19 of its players had tested positive. The Gators’ battle this weekend against L.S.U., one of the most anticipated matchups of the erratic season, has been postponed.

Speaking of L.S.U., most of its players have already had the virus at some point this season, according to Coach Ed Orgeron.

So it goes. Rutgers. Clemson. North Carolina. Virginia Tech. Kansas State. All of these teams, each with supposedly tight protocols, have experienced outbreaks. Mississippi is grappling with the virus. Vanderbilt cannot play this weekend because so many of its players are infected.

No worries. Move on.

After first announcing the suspension of football until after Jan. 1, the Big Ten and the Pac-12 reversed course and bowed to the need to chase the tens of millions in guaranteed television revenue by holding a season. By early November, both conferences will be playing again.

Both claim to have a magic formula: better testing and increased safety measures.

If this magic formula does not work as planned, if more coaches and players fall ill, expect a hail of the now typical excuses from college football enablers.

And expect little to change.

This virus starts as an isolated ember before becoming a blazing fire. It hardly stays confined to the individual. What happens when the young quarterback, who may not even have symptoms or shrugs them off, goes to fraternity row and inadvertently keeps the spread going? What happens when he unwittingly takes his illness home to his parents? And when he gives his coach a hug and passes on the virus?

“We are all in this together, all of us connected,” Dr. Cyrus Shahpar, director of the epidemic prevention team at Resolve to Save Lives, a nonprofit group that focuses on global disease prevention, said when we spoke this week.

We still have a lot to learn. Exactly. And much to fear. But even with one of the most revered coaches in college football possibly infected with the virus, the enabling chorus will not fade.

Move on, they say. Move on.