From the Georgia Tech Blueprint

For three years, four brilliant athletes have performed for Tech on the hardwood floor. During this time, Tech basketball has reached heights never dreamed of by many and predicted only by the few who knew the caliber of these four stalwart sons of Tech. Bo Johnston, Bill Jordan, Fletcher Sims, and Ed. Jones, coming to Tech as the outstanding athletes of their respective high schools, gave early indication of their eventual superiority in Southeastern Conference basketball.

As Sophomores, they furnished the spark that ignited the flame which began to blaze a three-year trail across Tech’s already illustrious athletic history. Last year, as Juniors, these four men, assisted by two Seniors and two Sophomores, completed a season of no defeats. However, the culmination of and the reward for this brilliant court play was not to come until the following year. At the Southeastern Conference Tournament of last year, Tech lost its only game of the season to a powerful Kentucky team in the finals. The loss of that game, the most crucial of the season, was a stunning blow to the four men who had fought constantly for two years to gain basketball supremacy in the South.

Consequently, these same four men opened this year’s season with an indomitable determination to capture the Southeastern Conference Basketball Crown. This unconquerable spirit, coupled with their uncanny court ability, brought to Jones, Jordan, Johnston, and Sims the reward for which they had fought so faithfully. They returned from the Southeastern Conference Tournament, along with the other six members of the team, triumphant as the South’s leading basketball aggregation and hailed by all Tech as the heroes of the 1937-1938 athletic year. They reached the goal which, three years before, they set for themselves. They, the four of them, formed the nucleus of a quintet that unknowingly but deservingly engraved its name deep in the annals of Tech’s brilliant athletic history.

Returning with them and sharing their glory was Coach Mundorff. To him goes the praise for producing a basketball machine never before equaled at Tech. Under his expert direction and able leadership these four men developed into the basketeers that thrilled Tech for three consecutive years. No praise is too high for Coach Mundorff, who by his skill on the court and friendly attitude on the campus has won the heart of all Tech men.

The opening of the 1938 season found Tech with only ten men from which it might build a championship team. The four lettermen from last year, Jones, Jordan, Johnston, and Sims, were joined this year by Seniors Joe Ebdon and George Peffal, Juniors George Smith, Junior Anderson, and Dillard Munford, and Sophomore Walter Haymans. With remarkable speed, Coach Mundorff molded these ten men, five of whom had just completed a strenuous season of football, into a co-ordinating, ball-passing, basket-shooting machine. In less than four weeks after practice started, this team was ready for action against its first opponent. 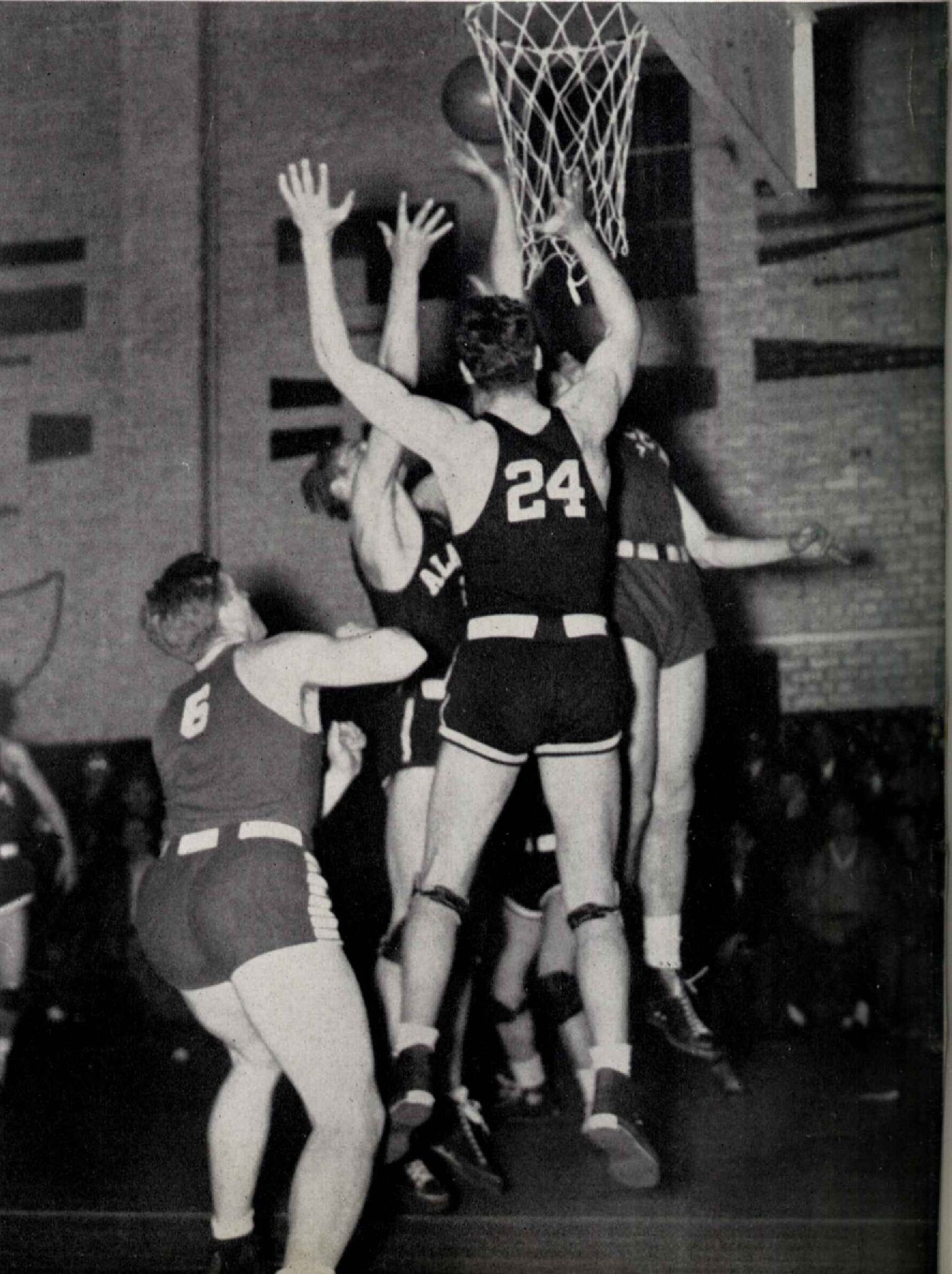 On January 8 a seasoned North Carolina State team, fresh from four early season victories, came to the flats to test the unseasoned Jackets. Taking an early lead, Tech led 24 to 10 at the half, but the experienced State team came back strong in the second period to narrow the Jackets’ lead to two points. In the last minutes of play, Tech’s four Seniors, aided by guard Junior Anderson, tightened up, ending the game with Tech on the upper side of a 35 to 30 score.

A week later Vanderbilt came to the Armory for the first encounter of a two-game series. Approaching their best play of the season, the Jackets very decisively defeated the Commodores in the first game, 59 to 25. Outstanding in this game was the brilliant second half scoring spurt by Fletcher Sims who had been held scoreless in the first half. He amassed a total of fifteen points in the second period. The second game, played February 12 in Nashville, found the Jackets a bit shaky on a strange court. Inspired by the cheers of their classmates, the Commodores stayed close on Tech’s heels throughout the entire game. Only by constant fighting did Tech finally win, 40 to 35.

Within the next two weeks, the Jackets won three games. A two-game series with Mercer University, one played at the Armory and the other in Macon, ended in two easy victories for Tech. Although these were the roughest encounters of the season the Techsters had little trouble winning. Our ancient rivals, the Crimson Tide of Alabama, gave us our first scare of the season at the Armory. The final score of Tech 36—Alabama 24 is not truly indicative of the close game that took place. Until the last two minutes of play the Jackets were unable to maintain a lead of better than four points. The last minute spurt, typical of the Yellow Jackets throughout the season, gave Tech a win in one of the best thrillers of the year.

Two more victories marked the Georgia series. Paced by illustrious Bo Johnston, lanky center who scored twenty points, Tech smeared the Bulldogs 51 to 28 at the Armory, January 29. However, on February 19 in Athens, the same Bulldogs made the going mighty hard for the favored Jackets. When the final whistle blew Tech led 29 to 27. 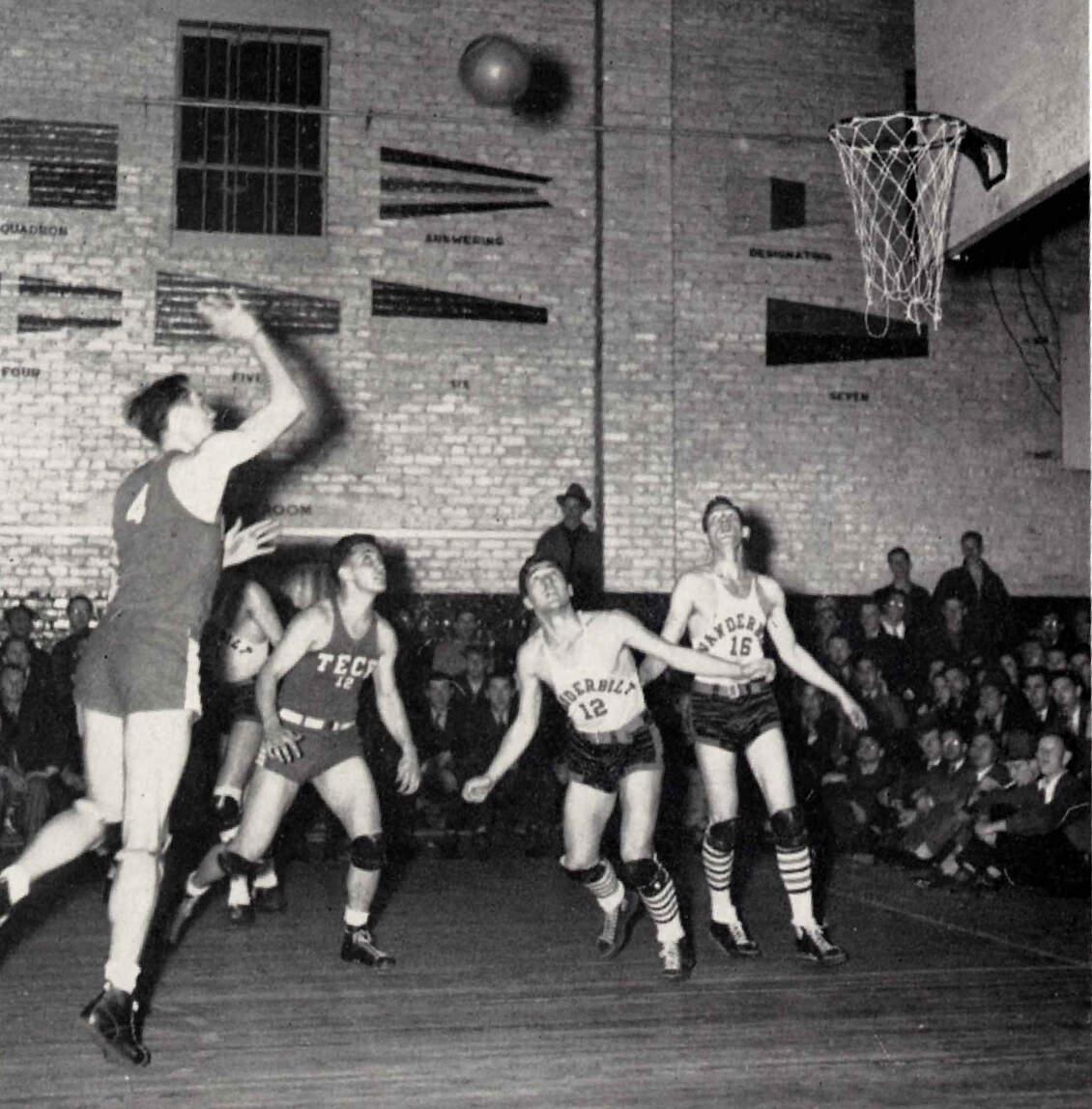 Guard Bill Jordan fires one in against Vanderbilt at the Tech Armory.

Wearied by first semester exams, a tired Tech team left Atlanta February 3 for the land of the bayous. They returned four days later dejected over two lost games. They fell before the attacks of L. S. U. and Tulane by the scores of 35 to 47 and 22 to 37. That these two losses were only the result of a mid-season slump was adequately proved when Tech won the Conference Championship later in the season.

A tribute of praise is due Coach Mundorff for his excellent work in bringing the Jackets hack to normal after these two disheartening defeats. Bounding immediately hack to championship form, the Tech machine easily defeated South Carolina in a two-game series, and Sewanee, Clemson, and Florida in one-game encounters. The Auburn Plainsmen offered somewhat stiffer competition in their two games. The first of the season was a scoring feast for both quintets, with the Jacket five emerging victorious by a one-point margin, 43 to 42. The second contest, last on Tech’s regular schedule, showed the Jackets beginning to approach their brilliant tournament form. Again Bo Johnston led the scoring, amassing a total of 24 points to bring Tech through an easy winner, 54 to 32.

At the Southeastern Conference Tournament held in Baton Rouge, La., March 4, 5, 6, Tech drew Vandy as an opponent in the quarter finals. Due to an injured ankle, Ed. Jones was forced from the line-up. His place at forward was ably filled by George Smith. At the other forward was Bill Jordan, at center, Bo Johnston, and at guards, Fletcher Sims and Junior Anderson. From the opening whistle to the final blast, it was all Tech. So effective was the guarding of Sims and Anderson that Vandy was able to score only 18 points during the entire game. Likewise, so brilliant was the shooting of forwards Jordan and Smith and center Johnston that Tech walked from the floor with an unbelievable total of 51 points. This was only the beginning.

The next day, in the semi-finals, the Jackets could see only red, and feel only the unsatisfied urge for revenge against Tulane. The same five men who the night before had smeared Vandy again played a brand of basketball characteristic of champions. Under the impetus of superb ball handling by Bill Jordan, the Jackets soared to new heights to defeat a fighting Tulane five 44 to 29. On the same night a brilliant Ole Miss team defeated L. S. U. and won the right to meet Tech in the finals. 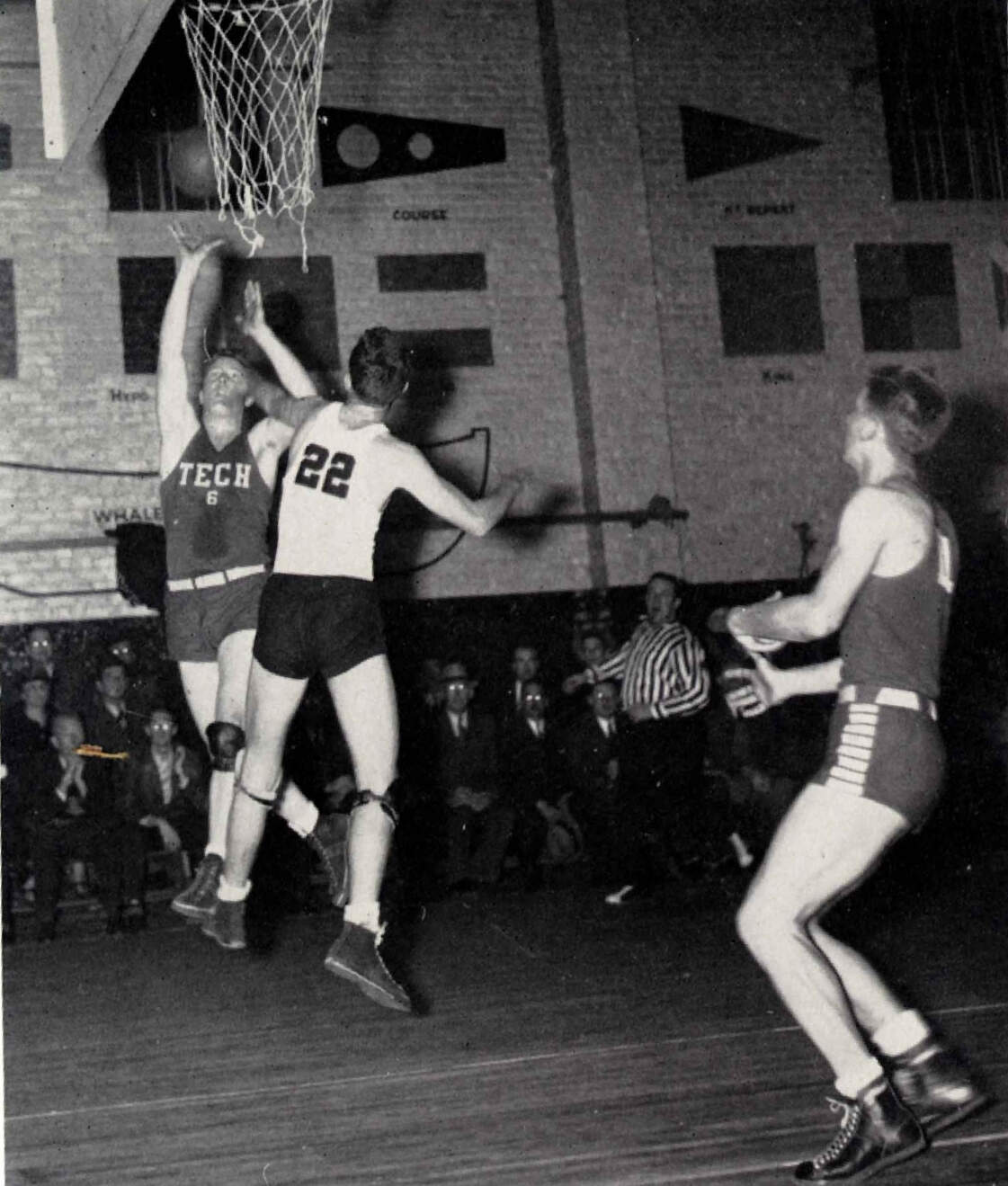 Junior Anderson, who would go on to earn All-America honors in 1939, gets two points against Georgia.

A more exciting game has never marked the finals of a Southeastern Conference Tournament. Mississippi’s “Country” Graham, considered one of the world’s best basket shots, and Tech’s ever dependable Bo Johnston furnished a thrilling exhibition in their duel for scoring honors. Johnston was the victor by right of his thirteen field goals for a total of twenty-six points as against a total of twenty-three for Graham.

Taking an early lead, Tech left the court at the half leading 32 to 21. Returning, the Jackets continued to dominate the play, and with fifteen playing minutes left Tech led 44 to 31. Suddenly Mr. Graham’s uncanny basket eye began to work, and within seven minutes Ole Miss had brought the score to 44 to 42. At this point, Ed. Jones, ankle and all, came into the line-up. He furnished the necessary stimulus to steady the Jackets and led them on a scoring spree that ended in a final score of 58 to 47 and the Southeastern Conference Championship.

Outstanding the whole season was the play of the six best basketeers in the South. Bill Jordan led the Jackets in brilliance with his superb ball handling. Never has Tech seen a man as capable of deceiving opponents by passes as Bill. Paralleling Jordan in brilliance was lanky Bo Johnston. His steady, nonchalant basket shooting was a sight thrilling to behold. Ed. Jones stood out for his fine work in “crip” shots which resulted from his speedy retreat to the opponents’ basket after a scuffle under the Tech ring. Guarding splendidly the entire season, Sims and Anderson were largely responsible for keeping opponents’ scores to a minimum. Especially spectacular was Anderson in taking the ball from the board. George Smith very ably played forward in alternation with Jones and Jordan. Ebdon, Haymans, Peffal, and Munford served well as reserves for the first six men. Their work was also outstanding, and without them the season would not have been successful.

David Silver and Johnny Woodall, as managers, share the glory that has fallen to the entire squad. Varsity letters were awarded to Jones, Jordan, Sims, Johnston, Anderson, Smith, Ebdon, and Peffal. Of these eight men only Smith and Anderson return to form a nucleus for next year’s varsity.