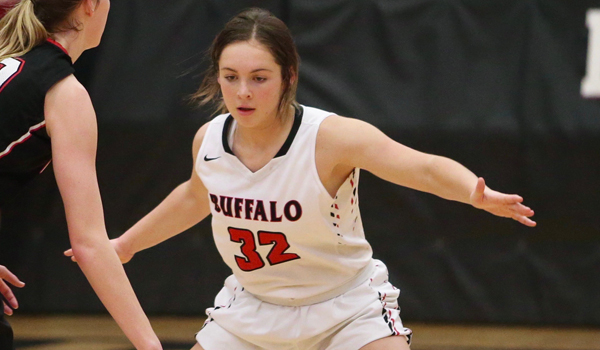 Buffalo girls basketball has a new head coach in Dana Henderson this season. Henderson has been the head softball coach at Buffalo the past three seasons.

“I have been coaching at Buffalo for the past three years. My first two years were spent as the head coach of the Junior High program and last year, I served as Coach (Tom) Stokes’ assistant. With all of that being said, I have coached most of these girls in the past and I am excited to work with them at the high school level,” Henderson said.

She will look to get the Bison back above .500 after finishing 8-17 overall last year.

Junior Bella Young is the team’s leading returning scorer after she averaged 10.6 points per game last year. No other returning player averaged more than 4.6 ppg.

“Bella will play a huge role for us as our point guard and court leader,” Henderson said. “Bella brings a lot of assets to the court with her athleticism and work ethic.”

“Darby took a year off from basketball her sophomore year, but really came out the play this summer. Darby brings a tremendous amount of athleticism to the team,” Henderson said. “Karolyn moved in from Walnut Grove and brings a lot of energy. She will definitely be an asset to our team. Marlee has a great work ethic and has made great strides over the summer.”

Senior Bella Lang, juniors Audrey Vest, Journey Edgington and Cheyann Kennady along with sophomore Reagan Carter also will look to have an impact.

“We are going to come out and compete in every game to give ourselves a chance to win in the fourth quarter,” Henderson said. “As a whole, we have great leadership and a lot of young girls with a tremendous work ethic.”

Buffalo opens the season Nov. 30 through Dec. 4 at the Fair Grove Tournament.

“My overall expectations for this team is to compete in every game,” Henderson said. “We have all of the pieces we need to be successful.”