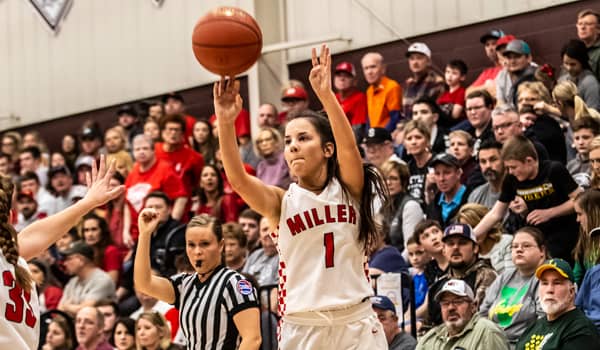 The team will be led by a group of four juniors this year.

“The juniors are a great group of girls. They have played together since they were little and have a great bond. All four provide something different to our team’s success,” Miller head coach Hannah Wilkerson said. “As juniors now, they have been through postseason play (in all sports they play), and they understand the importance of getting better each day in order to reach their goals. They make everyone around them better.”

Miller has posted back-to-back 25-6 seasons that included district titles and finished one game short of the final four in each season.

“We are our best when she (Hadlock) is on the court. She is a very smart player that knows how to control a game. She can score, create shots for her teammates and be an excellent defender. Claudia always does what it takes to win. She works hard and always wants to get better,” Wilkerson said.

“Kaylee’s strength is her biggest asset. She may not be very tall, but definitely plays big. She does a great job of finishing with contact. Last year she was the most consistent player we could always count on her to make a big play offensively or defensively,” Wilkerson said.

Hadlock and Helton set the tone for Miller.

“I expect them to always come in to every practice and game with energy. Their energy is contagious and their teammates feed off them,” Wilkerson said.

Payten Richardson and Ashten Kingsley make up the rest of that core junior quartet.

“Payten does a great job scoring from anywhere on the court,” Wilkerson said. “Her speed is her biggest strength, which allows her to get to the basket and draw fouls easier. She has continuously improved on her game. She does a lot of individual work in the off-season. I look for her to have another big season.”

Kingsley was named honorable mention all-conference honors as a sophomore. She averaged 5.3 points and 4.8 rebounds per game last year.

“Ashten Kingsley is a big presence inside. She does a lot of the dirty work that makes an impact in games. She prevents a lot of easy baskets and second chances with her height and ability to rebound,” Wilkerson said. “Offensively, she can shoot inside or outside. She has got a lot stronger since freshman year. I am really excited about the year she could have.”

Alyssa Hill and Haylie Schnake are two sophomores that each played in at least 26 games as freshmen. Hill was the first player off the bench last year. Wilkerson described her as one of their toughest players.

Senior Lili Merrick will make an immediate impact after transferring in from Liberty High School.

Miller will look to use a strong schedule that includes the Carthage Tournament, Walnut Grove Holiday Tournament and the Stockton Tournament.

“We have a tough schedule which is what we wanted. We want to use those games to get better,” Wilkerson said. “Overall, we have mentally tough and confident team. Win the games we should, maybe win some you shouldn’t and learn something from losses. I feel our schedule will better prepare us for postseason play.”

Miller opens the season on Nov. 30 at Mansfield.