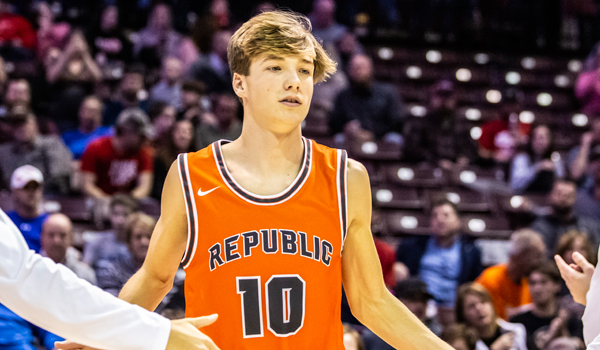 After a highly decorated playing career locally, Republic’s Tim Brown continues to prove why he is one of the best young basketball minds in the Ozarks. The Tigers are 42-15 in Brown’s first two seasons, including the program’s lone district championship in the last six years.

Republic was again hit hard by graduation losses, but Brown and company will look to make it a reload rather than a rebuild behind one of the best backcourts in the Ozarks in senior Drew McMillin and sophomore Ahlante Askew.

McMillin, an All-COC performer as a junior, averaged 18.9 points and 3.3 rebounds last season, with a blistering 54-47-85 shooting split. Most impressively about his 47 percent shooting from 3-point range is that he totaled 85 makes (currently holds the Republic career 3-FG record). Askew saw a significant role as a freshman, averaging 5.8 points and shooting 42 percent from 3. He also led the team with 17 charges taken.

Both dynamic guards are expected to take on even bigger roles this winter.

“Drew has been one of the best guards in our area and our league since he was a sophomore,” said Brown. “He has put our program in a position to compete for and win conference and district championships. He is an elite shooter who has taken the steps to improve his game each year. What makes him special is that he is a great teammate and great person. He is the same guy every day and competes at a high level in practice every day to put him in a position to be the player he is each game.

“Ahlante established himself as one of the best freshmen last year in SWMO. He has great court awareness and vision. He plays the game with a high motor on both ends of the floor and is very skilled offensively. Te has continued to expand his game for us and we look for him to be a more consistent play maker and scoring threat for us this year. He will have the ball in his hands more for us this year with the green light to make plays for himself as well as his teammates.”

Seniors Carson Neff and Oliver Welch also return after lettering last season. The two balance each other out with Neff being another guard capable of scoring, while Welch is an elite perimeter defender.

“Carson is a skilled guard, and is a good perimeter shooter,” said Brown. “He stepped up in some key moments last year and made some big plays for us. He continues to get better and we expect him to have a great senior season. Oliver is a hard-nosed, gritty guard that plays the game with a lot of energy and toughness. He is one of our best defenders in our program and makes winning plays on both ends of the floor.”

Brown is excited about his crop of newcomers, who should bring some length to the table.

Senior Tyson Young and junior Avery Moody are both high-motor, two-way forwards that will compete for reps immediately, along with senior Dalton Parks. Junior Devon McMillin, as well as classmates Will Fronanbarger, McCord Deken and Jabali Wannekaya will all compete for rotational minutes.

For Republic, this year will be about learning to get over the hump. Over the last two seasons, the Tigers have lost six games by six points or fewer, including last year’s district championship loss to Joplin. There will be several new faces adjusting to new roles, but the expectations within the program never change.

The Tigers want to be playing meaningful games well into March; conference, district and beyond.

“As always the COC will be a battle every single night,” said Brown. “It is a great conference with elite basketball programs that have good coaches and players and a lot of history and tradition. It will be important for us to be prepared and play with great effort and execution on both ends of the floor each and every single night. Our coaching staff and our players are excited about this upcoming basketball season. We have an experienced group returning and a good mix of upperclassmen that understand our program’s culture, identity and expectations. We also have a good group of underclassmen and newcomers that are ready to compete and contribute to our basketball program so we are expecting our standards to remain high.

“Our program’s goal each season is to put our team in a position to compete for championships. We were fortunate enough to be in those positions last year in the conference standings and the district finals. Obviously we came up a little short of those goals but it wasn’t for a lack of effort and preparation from our guys. Our guys take pride in the grind and the little things and last year’s group was as professional as they come. It will be important for this year’s team to fall in love with the grind to maximize our season.”

Republic will open the 2020-21 season on Nov. 24, at home, against Class 4 Final Four participant Helias Catholic.