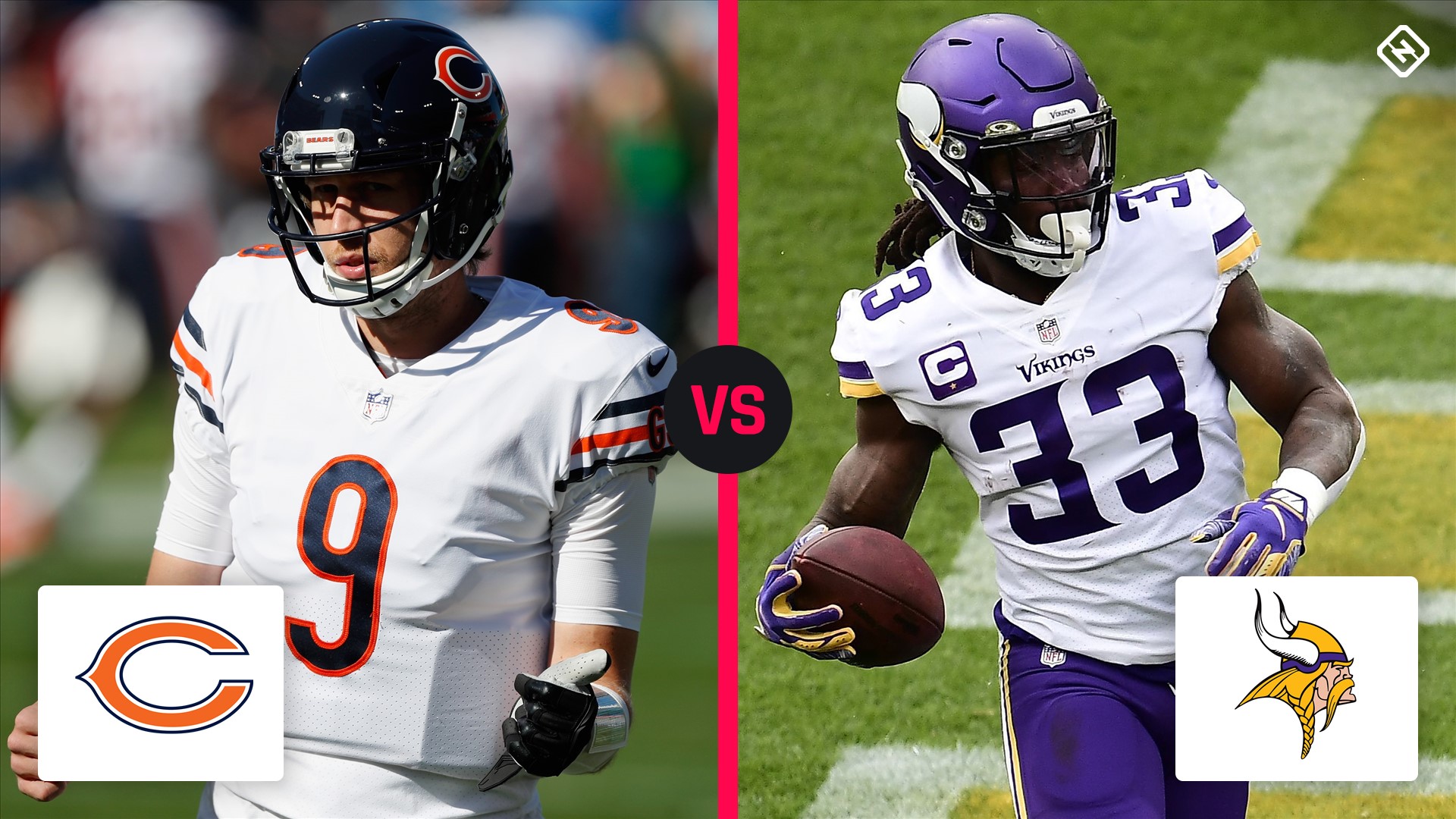 Kirk Cousins finally got the “Monday Night Football” monkey off his back as the Vikings edged the Bears 19-13 in Week 10.

Cousins entered the contest 0-9 in “MNF” games in his career, and he was 0-4 against Chicago since joining Minnesota in 2018.

While Dalvin Cook was the key to the Vikings’ success in their last two wins, the Bears held the running back to 96 yards on 30 carries. Cousins stepped up and had a solid night: 25-of-36 passing for 292 yards, with touchdowns and an interception.

Rookie wideout Justin Jefferson was his top target, hauling in eight catches for 135 yards — his fourth 100-yard game of the season. Adam Thielen added four catches for 43 yards and hauled in both TD catches. The first came in the first quarter to give Minnesota a 7-0 lead; the second came in the fourth quarter to break a deadlock and give the Vikings a 19-13 lead.

Chicago’s offense struggled to get much of anything going. Nick Foles completed 15 of 26 passes for 106 yards and an interception before leaving with an injury on the Bears’ final drive. Cordarrelle Patterson was the leading rusher with 12 carries for 30 yards. The only Bears points came from their special teams. Cairo Santos hit a pair of field goals and Patterson returned the second-half kickoff 104 yards for a TD to give Chicago a 13-7 lead.

The Bears’ defense couldn’t have done much more. It held Cook, who had eclipsed 200 total yards in back-to-back games, to 112 yards on 34 touches (3.3 yards per touch). The unit also forced two turnovers, with Trevis Gipson recovering a fumble forced by Danny Trevathan on the Vikings’ opening possession and Khalil Mack intercepting a pass late in the first half to set up a Santos field goal that made it 7-6 heading into the locker room.

With the win, the Vikings (4-5) have now won three straight and are half a game in back of the Bears (5-5) for second in the NFC North.

11:10 p.m. — Foles is down. He was able to throw it away but got thrown down hard by Ifeadi Odenigbo. Tyler Bray comes in.

11:03 p.m. — Vikings punt. Bears get the stop they need and get the ball back at their 20-yard line, 44 seconds remaining. No timeouts left for Chicago.

10:54 p.m. — Two-minute warning. Minnesota has it, second and 6 at its 39-yard line. Chicago still has all three timeouts and can get the ball back with a stop here.

10:53 p.m. — TURNOVER ON DOWNS. Foles overthrows an open Miller on fourth down and Minnesota gets the ball back at its 35-yard line, 2:04 remaining.

10:23 p.m. — END OF THIRD QUARTER: Bears 13, Vikings 13. Chicago goes three-and-out for the third time in the second half as Foles is sacked on third down. Bears will more than likely punt to start the fourth quarter.

Justin Jefferson went over 100 yards receiving during the drive. Another big night from the rookie out of LSU.

10:07 p.m. — Bears go three-and-out. Chicago can’t capitalize on the excellent field position and has to punt. Minnesota takes over at its 15-yard line, 5:12 left in the third quarter.

10:01 p.m. — Vikings go three-and-out. Anthony Miller takes this punt and returns it to the Minnesota 46-yard line. Great field position for the Bears to potentially add to their lead, 7:01 remaining in the third quarter.

9:58 p.m. — Bears punt. KJ Osborn nearly bobbles the return but secures the ball and is brought down at the Minnesota 22-yard line. Vikings have it with 9:13 left in the third quarter.

9:48 p.m. — FUMBLE. Dwayne Harris with a rare muffed punt and Minnesota recovers at the Chicago 20-yard line with 11:43 left in the third quarter.

9:41 p.m. — TOUCHDOWN, BEARS. Cordarrelle Patterson takes it to the house on the opening kickoff of the second half and now he’s tied for the all-time NFL kick return record. Bears lead 13-7 with 14:46 left in the third quarter.

9:21 p.m. — FIELD GOAL, BEARS. Back to back incompletions for Foles and Santos comes out and hits a 42-yarder to make it 7-6 with 49 seconds remaining in the half.

9:18 p.m. — INTERCEPTION. Khalil Macks makes a surprise drop into coverage and snags it off the bobble from Thielen. Bears get the ball back at the Minnesota 45-yard line, 1:51 left in the half. They have all three timeouts.

8:46 p.m. — FIELD GOAL, BEARS. Chicago’s drive fizzles out at the goal line and Cairo Santos comes on for a 23-yard field goal to make it 7-3 with 32 seconds left in the first quarter.

8:33 p.m. — TOUCHDOWN, VIKINGS. Kirk Cousins drops in a perfect ball to Adam Thielen, who hauls it in with one hand to beat the man-to-man coverage for a 17-yard TD. Minnesota leads 7-0 with 6:29 remaining in the first quarter.

8:27 p.m. — INTERCEPTION. Two plays later and Chicago gives it right back. Nick Foles’ pass is tipped by his own man Anthony Miller and picked off by Harrison Smith. Vikings get it back at the Chicago 41-yard line, 9:34 left in the first quarter.

8:23 p.m. — FUMBLE. Danny Trevathan knocks it loose from Kyle Rudolph after the catch and Trevis Gipson recovers at the Chicago 27-yard line, 10:35 left in the first quarter.