Week 12 ACC Football Players of the Week Announced – The ACC 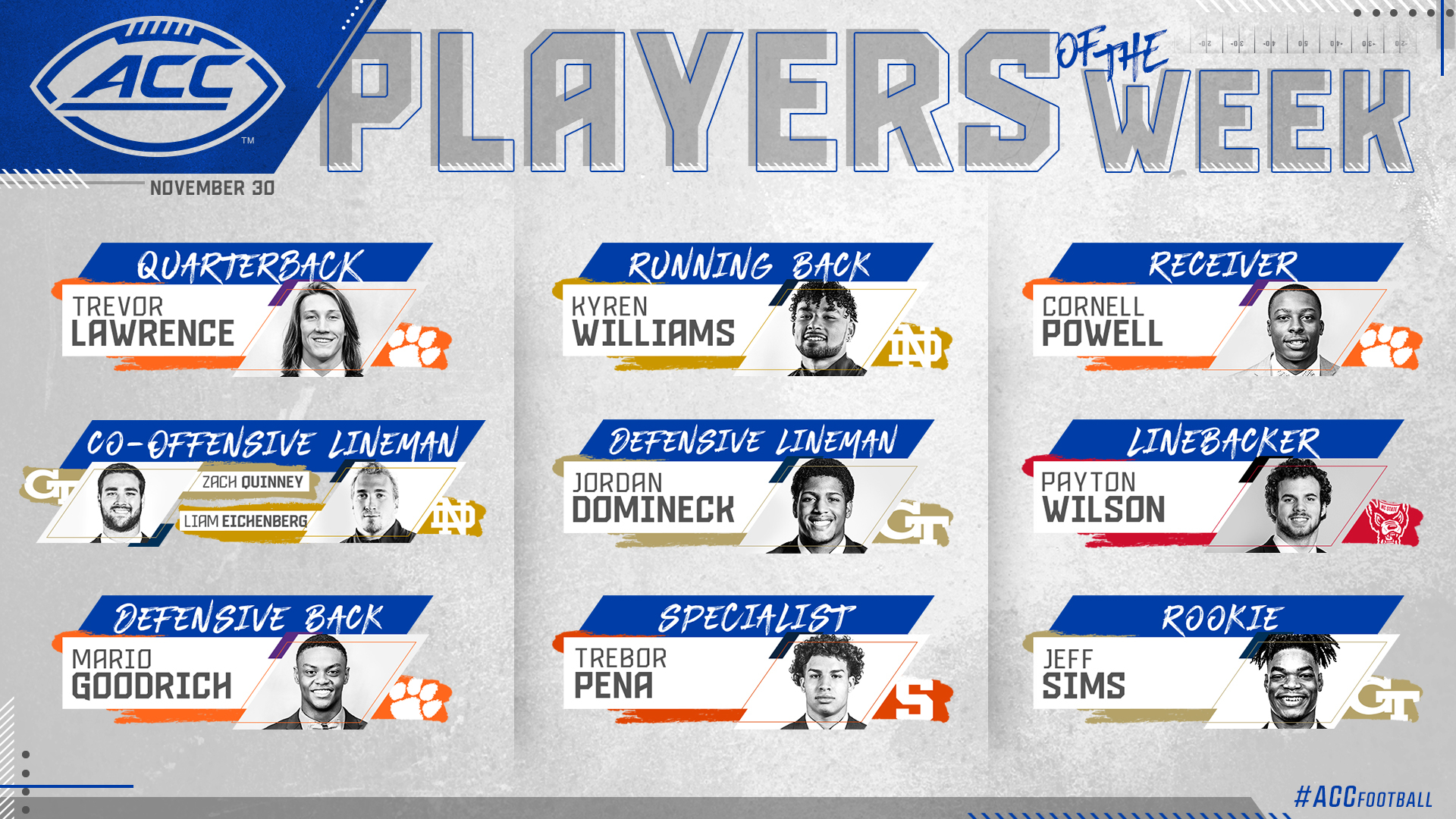 GREENSBORO, N.C. (theACC.com) – The Atlantic Coast Conference Football Players of the Week have been recognized following their standout performances in last weekend’s games.

The selections are determined by a vote of a 16-member media panel. The following are this week’s honorees:

QUARTERBACK – Trevor Lawrence, Clemson, Jr., QB, Cartersville, Ga.
Completed 26-of-37 passes for 403 yards with two touchdowns and no interceptions in a 52-17 win over Pitt, improving to 32-1 as a starter to tie Rodney Williams, Tajh Boyd and Deshaun Watson for the school record for wins as a starting quarterback • It was his second career 400-yard passing day, ending one yard shy of his career high of 404 passing yards set earlier this season at Georgia Tech.

RUNNING BACK – Kyren Williams, Notre Dame, So., RB, Saint Louis, Mo.
Recorded 23 rushes for 124 yards and two touchdowns and four receptions for 20 yards and a touchdown in No. 2 Notre Dame’s 31-17 victory over No. 19 North Carolina • Williams’ three touchdowns ranked tied for third among all FBS players on the weekend, and was the only FBS player with three or more touchdowns this weekend to have at least one receiving and one rushing touchdown • Friday marked Williams’ fifth 100-yard rushing performance of the season, which ties for most in the ACC.

CO-OFFENSIVE LINEMAN – Zach Quinney, Georgia Tech, Jr., LT, Savannah, Ga.
Quinney helped pave the way for Georgia Tech to rush for 377 yards in Tech’s 56-33 win over Duke • The Yellow Jackets had their highest rushing- and total-yardage (523 yards) outputs since 2018 at North Carolina • Behind the Quinney-led offensive front, Georgia Tech had three players with at least 90 rushing yards (Jeff Sims – 108, Jordan Mason – 105 and Jahmyr Gibbs – 91) and four with at least 60 yards on the ground (including Dontae Smith – 60) • Quinney delivered key blocks on each of the Yellow Jackets’ four touchdown runs, all of which went for 20 yards or more (61 and 22 yards by Gibbs and 36 and 22 yards by Smith).

CO-OFFENSIVE LINEMAN – Liam Eichenberg, Notre Dame, Gr., LT, Cleveland, Ohio
Led an offensive line that paved the way for 478 yards of total offense (199 rushing with three touchdowns, 279 passing with one touchdown) and 35:04 time of possession in a 31-17 win over No. 19 North Carolina • The Fighting Irish have now won the time of possession battle in eight of nine games this season and average 34:12 per game, which continues to lead the ACC by more than two minutes per game, and ranks 10th among all FBS teams • The Irish posted four touchdown drives of at least 75 yards Friday, including a season-long 97-yard scoring drive.

DEFENSIVE LINEMAN – Jordan Domineck, Georgia Tech, So., DE, Lakeland, Fla.
Domineck stuffed the stat sheet with two sacks, 2.5 tackles for loss, a forced fumble, a fumble recovery and his first career touchdown in Georgia Tech’s 56-33 win over Duke • Helped lead a defensive effort that limited Duke to just 68 rushing yards • His two sacks and 2.5 TFL were both career highs • Made arguably the biggest play of the game when he sacked Duke QB Chase Brice in the end zone, forcing a fumble that he recovered for a touchdown that gave Georgia Tech a 28-23 lead late in the first half • Domineck was also credited with a QB hurry in the win.

LINEBACKER – Payton Wilson, NC State, So., LB, Hillsborough, N.C.
Key factor behind the Wolfpack holding Syracuse to just three rushing yards – the lowest opponent total in a game since 2015 and the lowest in an ACC contest since 2011 • The Orange had just 257 yards of total offense • Led the Wolfpack in tackles with 10, including eight solo stops • Made arguably the biggest play of the game in the final seconds when he sacked the QB for an 11-yard loss • Wilson is the league’s leading tackler with 10.8 stops per game, which ranks 17th in the FBS.

DEFENSIVE BACK – Mario Goodrich, Clemson, Jr., CB, Kansas City, Mo.
Made his first career start and recorded two interceptions, becoming the first Clemson player to pick off two passes in a single game since Cordrea Tankersley in the 2016 ACC Championship Game against Virginia Tech • Part of a Clemson defense that picked off Pitt quarterback Kenny Pickett four times after Pickett had entered the game with only four interceptions in 259 pass attempts this year.

SPECIALIST – Trebor Pena, Syracuse, Fr., KR, Ocean Township, N.J.
Pena took an NC State kickoff back 98 yards for a touchdown in what was Syracuse’s longest kickoff return since 2011 • Pena recorded the Orange’s first points of the game on his first return attempt • He finished the day with 115 return yards on two kick returns.