Chase Young and Washington’s Defense Have the Football Team… 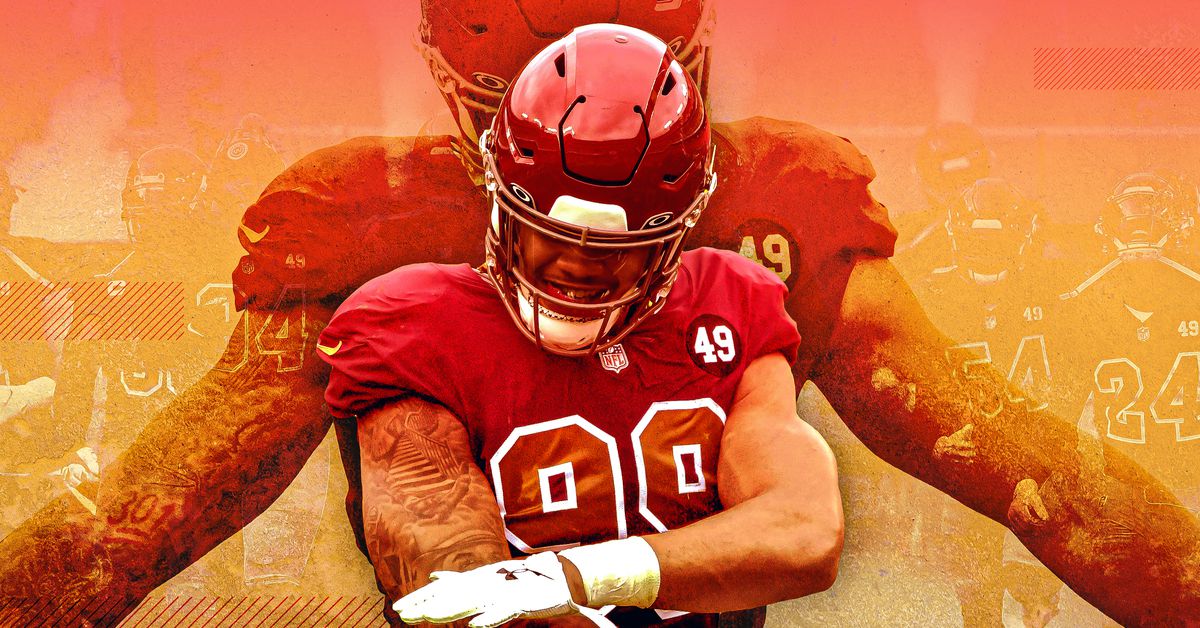 Carla Young couldn’t contain her excitement while watching her son, Chase, score his first NFL touchdown. Late in the first half of Washington’s win against the 49ers on Sunday, San Francisco’s Nick Mullens was sacked and fumbled the ball. Young, who’d executed a stunt away from the play, saw the ball dribble along the turf, scooped it up, then dashed down the left sideline and followed a handful of blockers for a 47-yard touchdown to give the Football Team a lead just before halftime.

“Oh my gosh, I’m just so worn out!” Carla, who was on FaceTime with Young during his postgame interview session, told reporters of seeing Chase’s score. “It was outstanding. I couldn’t even believe it! I was in shock. He knows how to pick that ball up and not fall on it, and he got it and kept trucking!”

Young’s scoop-and-score marked the turning point in Washington’s 23-15 win over San Francisco, a victory that catapulted the Football Team into pole position for the NFC East title. Washington didn’t relinquish its lead the rest of the game, and Young’s performance was crucial in a game in which the Football Team failed to score an offensive touchdown. In the first half alone Sunday, the rookie recorded one sack, forced one fumble and scored the aforementioned touchdown. The dominant showing served as a stark reminder of why so much hype surrounded the 2020 draft’s no. 2 overall pick. Still, it’s difficult to describe just how dominant Young’s outing was. It was even difficult for him to explain after Sunday’s game.

“I’m at a loss for words,” Young said. “I was out there playing ball, man. And good things happened for me today.”

Washington went from a 1-5 squad in mid-October to a 6-7 record two months later. The Football Team enters Week 15 atop the division, in control of its destiny and with a clear path toward reaching the postseason—a feat the franchise hasn’t accomplished since 2015. At one point this year, the NFC East as a whole appeared to be a master class of ineptitude, destined to be unsortable. But over the past four weeks, the division has gone 9-6, boasting the best record of any in that span. Some of the surprising results have included the Giants beating the Seahawks, the Eagles topping the Saints, and Washington dropping the previously unbeaten Steelers. Ron Rivera’s squad has ridden a four-game winning streak to emerge as the winningest of the group to this point, and a dominant defense has been the key to the team’s rise.

Young’s touchdown was followed by fellow rookie Kamren Curl’s 76-yard pick-six at the end of the third quarter, when the seventh-round safety jumped on a pass floated by Mullens into the flat. Washington overcame its offense failing to generate much of anything. Alex Smith, who left the game with a strained calf, went 8-for-19 with 57 yards and one pick, and registered a QBR of 8.0; Dwayne Haskins, who made his first appearance since Week 4, went 7-for-12 with 51 yards, compiling a QBR of 30.7. The Football Team’s offense generated a measly 3.1 yards per play and engineered only 12 total first downs across 14 drives. Despite the limitations, Washington’s stout defense stepped up, accounting for four sacks, 11 pass deflections, and 12 quarterback hits, while holding the Niners to 4.5 yards per play and 4-for-15 on third down.

“I thought [the defense’s] energy and tempo throughout the game was what we needed,” Rivera told reporters Monday.

That’s been the trend for Washington throughout the year; Washington entered Sunday ranked fourth in Football Outsiders’s defensive DVOA, but 28th in offensive DVOA. Much of that energy Rivera referenced can be attributed to the plethora of young stars that Washington has turned to. Defensively, the Football Team’s roster is littered with first-round picks along the defensive line, including Young, defensive tackles Da’Ron Payne and Jonathan Allen, and defensive end Montez Sweat. Second-year linebacker Cole Holcomb and third-year defensive tackle Tim Settle, and Curl, the rookie safety, have each been productive starters within defensive coordinator Jack Del Rio’s unit, too. And while the offense has lagged behind, it has some stars that point to a positive long-term outlook. Rookie tailback Antonio Gibson, second-year receivers Terry McLaurin (who crossed the 1,000-yard receiving threshold on Sunday) and Steven Sims Jr., along with third-year wideout Cam Sims, have emerged as reliable playmakers. Rivera has been pleased with the spark that the youth of his squad has injected into the entire team.

“I think we’re feeding off the energy of our young players,” Rivera said Monday. “I think it’s helping the veteran guys to play with energy. I think that’s one of the big things that’s helped us.”

Washington’s opening day starting lineup ranked as the fourth-youngest behind the Giants, Jaguars and Falcons. The Football Team’s roster as a whole, however, ranked as the 14th-youngest, which speaks to Rivera’s mentality and willingness to get young players involved early. On Monday, he recalled employing a similar approach during his tenure with the Panthers, noting that in 2015, Carolina went on to reach the Super Bowl with a core composed of mostly home-grown talent, featuring players on both sides of the ball who’d spent their entire careers with Carolina. Rivera now appears to be following that blueprint in building the foundation of his Washington squad.

“We’ve got a group of young guys that are playing right now, and we’ve got a sprinkling of vets,” Rivera said. “And who knows what happens in the next couple years in terms of us adding selected guys in terms of the draft and free agency. We’ve got a ways to go before we start talking about [reaching the Super Bowl] realistically, but this can be one of the springboards going forward.”

Of course, that’s a long ways away, as Washington still doesn’t have a winning record. In a more competitive division, the Football Team wouldn’t even be a wild-card team. Nonetheless, the Football Team is on track for the postseason, boasting a 68.2 percent chance of winning the NFC East, according to ESPN. It’s great for Washington’s short-term prospects. But the reason why Sunday’s victory was perhaps even more exciting is because of the glimpses it could reveal into the future. Young, 21, has produced a compelling case for earning Defensive Rookie of the Year, having compiled 5.5 sacks, three forced fumbles and 24 total pressures, per PFF. Young entered Sunday ranked sixth in ESPN’s pass-rush win rate (24 percent), and according to The Athletic’s Rhiannon Walker, Young entered December as the NFL’s seventh-most double-teamed edge rusher in the NFL. The rookie is certainly not the only star player along Washington’s front—Sweat (seven sacks), Ryan Kerrigan (5.5), Settle (five), Allen (two) and Payne (two) have also been fierce, productive players along the line—but Young’s emergence over recent weeks, and his progression since returning from a Week 3 groin injury, has helped Washington’s identity begin to come together.

On Monday, Young was asked why the defense had improved over the past month, and he couldn’t put a finger on it. He said there’d been better effort in practice, then referred to the team’s motto to “keep going.”