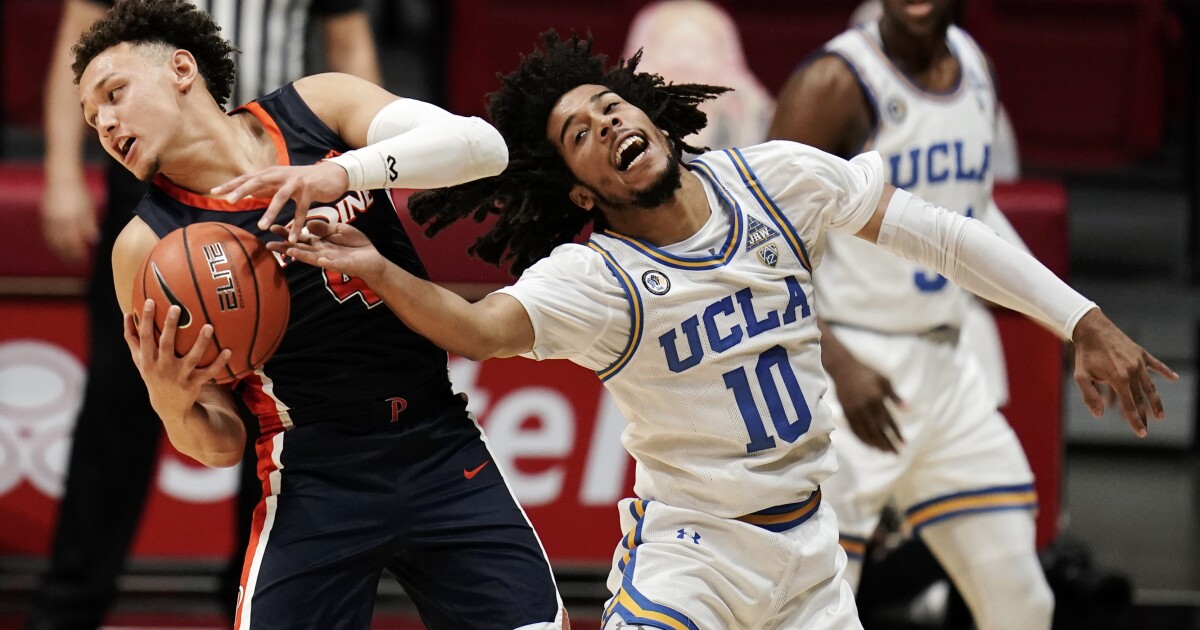 Games getting wrecked by the coronavirus.

Bruins coach Mick Cronin broke the news to his players Monday afternoon that if they were to face Long Beach State, it would have to come on another day as opposed to the game scheduled for that evening.

“I said, ‘Welcome to the COVID season,’ ” Cronin later told the Times, recalling the scene.

The Bruins had already completed their shootaround and pregame preparations when the game was called off. It was postponed “out of an abundance of caution based on COVID-19 protocol” within the Long Beach State program, according to a release issued by UCLA a little more than two hours before the scheduled tipoff.

Cronin said he didn’t have any additional details other than the problem involved a game-day test with the Beach after everything had been fine in previous days.

“I can’t tell you much,” Cronin said. “I can just tell you we got the phone call and that was that.”

Cronin said he was already in discussions with Long Beach State counterpart Dan Monson regarding possible dates for rescheduling the game later this month. The Bruins (1-1) have a fairly packed schedule with the exception of an eight-day break between games against Marquette on Dec. 11 and Kentucky on Dec. 19, though that comes during finals week.

“Long Beach’s down the street,” Cronin said, “so this one’s easily made up.”

UCLA is next scheduled to play Seattle on Thursday before opening an expanded 20-game Pac-12 Conference schedule against California on Sunday.

Long Beach State has not played a game this season. As part of the contract it signed to play UCLA, the Beach had agreed it would follow Pac-12 testing protocols for the coronavirus. While the Bruins are expected to provide day-of-game testing for teams visiting from outside Southern California, Long Beach State had conducted its final testing on campus, Cronin said.

The possible loss of games because of virus issues prompted Cronin to schedule a difficult opening stretch against San Diego State and Pepperdine to boost his team’s strength of schedule. The Bruins lost to San Diego State and needed three overtimes to beat Pepperdine, with guard Jaime Jaquez Jr. playing all 55 minutes and guard Tyger Campbell playing nearly 52 minutes.

Given an unexpected day off, the Bruins can soak a little longer in the cold tub.

The day wasn’t a total loss for the Bruins. They picked up a huge recruiting win when Mac Etienne, a highly coveted center from Wolfeboro (N.H.) Brewster Academy, announced on Twitter that he had committed to UCLA.

If Etienne signed with the Bruins, he would provide another elite post player should Hill and forward Cody Riley return for the 2021-22 season or a necessary replacement should one or both of them depart.

The addition of Etienne to a recruiting class that already included Long Beach Poly High’s Peyton Watson and Las Vegas Bishop Gorman’s Will McClendon sent it soaring up the rankings. UCLA’s 2021 class is now ranked No. 1 in the Pac-12, according to 247 Sports, and No. 4 nationally.

He had only praise for the way the virus situation was handled to protect both his team and the Beach, noting that other schools might not be as cautious.