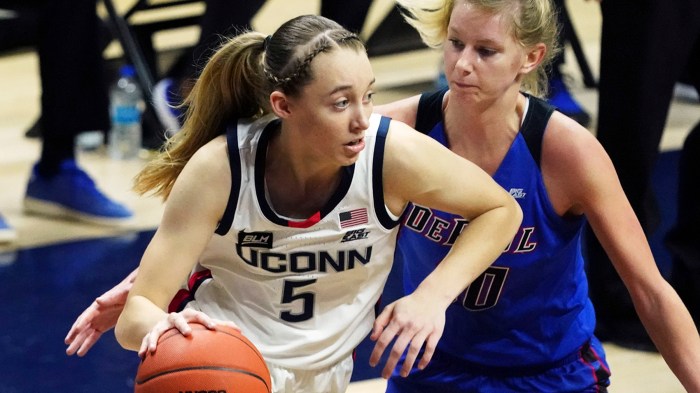 Connecticut head coach Geno Auriemma has a theory on why anyone thinks there’s a better freshman in the country than his starting point guard, Paige Bueckers.

“I’m not boasting, but if I talked to every single coach in America and they told you they’d rather have their freshmen than Paige, I would tell you they’re only saying that to be nice to their own players,” Auriemma told a media gathering on Zoom last week. “In my mind, there isn’t anything Paige can’t do on the court.”

His praise for Bueckers is understandable, even if the assertion of dominance led to some anger around the Twittersphere from those who resent UConn’s claims to glory. (How anyone can deny them is another story altogether.)

But Bueckers, the consensus top recruit in her class, has more than lived up to her advanced billing. In her first seven games, Bueckers is averaging 18.9 points per game on 58 percent shooting, including making half of her threes. Even rarer for a freshman, she is a difference-maker at the defensive end, with 2.7 steals per game — a true two-way star from the moment she stepped onto the court.

[The Oregon Ducks Lost Three Stars To The WNBA, But They Haven’t Lost A Step]

It is no reflection on Bueckers and her prodigious talent that there’s a debate over who is the best freshman in this class. Nor does it speak poorly of numerous other immediate starters and contributors across the country that all of them are struggling to break through in that debate.

Somehow, little has been said about Te-Hina Paopao. All she’s done since arriving at Oregon is take over the role Sabrina Ionescu held down, running the Ducks’ offense at a comparable level to when it contained three picks in the 2020 draft, while already collecting 2.6 win shares through 11 games played.

Paopao was the first player coach Kelly Graves cited back in mid-December, after the Ducks demolished their in-state rivals, Oregon State, 79-59.

“I thought Te-Hina really controlled that game from the point,” Graves said. “Such a tremendous job.”

Paopao faced off against another exciting freshman last week when Oregon fell to top-ranked Stanford. The 6-foot-4 Cameron Brink is shooting better than 62 percent from the field, and her 16.3 block percentage ranks third in the country, regardless of class.

Even so, the biggest challenge to Bueckers as the best freshman this season doesn’t come from Brink or from Paopao. Nor does it come from the dynamic combo guard Diamond Johnson at Rutgers, who has scored in double figures in her first eight games and at least 18 in her past four contests.

It’s not even the duo of Hailey Van Lith and Olivia Cochran of Louisville, a pair of newcomers both north of two win shares already, helping Jeff Walz’s Cardinals to title contention once more alongside player of the year candidate Dana Evans. Nor is it Lexi Fleming, the nation’s leader in win shares among freshmen, hitting 37.3 percent of her threes with a 7.6 turnover percentage as a 5-foot-5 point guard for Bowling Green.

No, it is Caitlin Clark of Iowa, who is staking her claim as not only freshman of the year, but player of the year as well.

After her 27-point, 10-rebound performance in Wednesday’s overtime loss to undefeated Ohio State, Clark is averaging 25.7 points per game, good for third in the country among all players. She is shooting 53.1 percent from two and 37 percent from three, but even these lofty numbers undersell her offensive value, as she is a volume shooter from all three levels on the floor. Her finishing at the rim is pro-ready, and she’s taking 8.4 threes per game — reflecting an Iowa team that is absolutely committed to giving her the reins.

Her teammate, Monika Czinano, has a joint perspective on the great Bueckers vs. Clark debate, as a Minnesota native like Bueckers. She’s not ready to declare a winner just yet.

“They’re both really amazing, and I’d say they play very differently,” Czinano said of the duo. “I think a lot of the freshmen in this class, they have different things, different niches, different things that they’re really good at. And I do think that with this team at this time, Caitlin is kind of what we needed — and things are moving and flowing really well.”

Like Paopao, Clark took over a position previously occupied by a now-WNBA point guard, in Iowa’s case Kathleen Doyle, and the offensive production of the Hawkeyes really hasn’t suffered at all — in fact, Iowa’s offense has improved significantly so far, producing 113.7 points per 100 possessions compared to 106.9 in 2019-20. That’s in large part due to Clark’s ability to find her teammates, despite her volume shooting — her 37 percent assist rate ranks 25th in the country, while her turnover rate of 18.2 percent, in the 52nd percentile nationally, reveals an ability to avoid bad decisions well beyond her years.

[After Beating Cancer, This Syracuse Point Guard Is Coming For The Record Books]

In what is best chalked up to the difference between the brashness of a Philly guy in Auriemma and the Midwesterner inside Lisa Bluder, Clark’s coach, the bragging on behalf of her player has a few more caveats.

“Well, I think you could give an argument for that,” Bluder said. “She’s certainly producing as she is one of the best freshmen in the country, and to be quite honest, I haven’t paid attention to a lot of the other ones. That’s just not on my radar right now. … So I’m really not in tune with what’s going on around the rest of the country with the rest of the freshmen, but I will just say just now obviously watching her, coaching her for the past few months, that she is certainly producing like she’s one of the best, if not the best, freshmen in the United States.”

Clark is not one to shy away from the moment. Here’s what she did against in-state rival Iowa State:

That’s a Diana Taurasi move. That’s not a freshman move.

But it is. That’s the level Clark is playing at.

So does she think she’s the best freshman in the country?

[How These WNBA Prospects Can Improve Their Draft Stock]

“I’m not going to comment on if I’m the best because there’s just so many talented ones and a lot I got to play with, for sure, that I know really well,” Clark said. “And I think that’s great for women’s basketball as well. You want those good players, you want great freshmen, and I think that’s just great for the game and brings a lot of attention to the game for sure.”

Her more holistic view of it is perhaps the best prescription for anyone in the Twittersphere who wants to make it about Clark or Bueckers, Johnson or Brink, Paopao or Van Lith. It’s all of them.