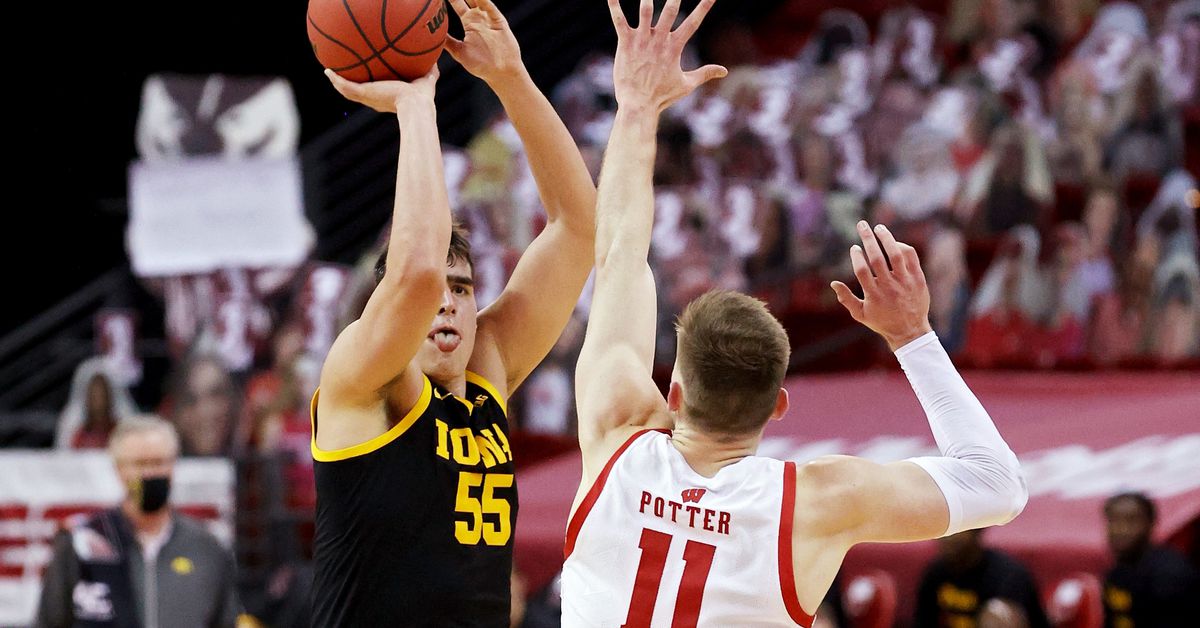 Hoping to avoid back-to-back losses for the first time this season, the No. 21 Wisconsin Badgers men’s basketball team (15-8 overall, 9-7 Big Ten) welcomed the No. 11 Iowa Hawkeyes to the Kohl Center on Thursday evening.

The Badgers came into the game after suffering a heartbreaking loss to Michigan on Sunday in which they squandered a 12-point lead at halftime. On the flipside, the Hawkeyes entered the contest on the heels of two straight double-digit wins over Rutgers and Michigan State respectively.

In a top-25 matchup that would have significant ramifications in the Big Ten standings, it was the Hawkeyes that came away with a big 15-point conference win.

The #Badgers fall at home for the fourth time this season, 77-62 to Iowa.

Micah Potter led the way for Wisconsin with 23 points and 11 rebounds, but Luka Garza and Joe Wieskamp combined for 47 points and 16 boards.

In the opening minutes of the first half Iowa went on an 11-0 run behind six points and three rebounds by National Player of the Year candidate Luka Garza to take a 11-3 lead into the first media timeout.

The Badgers had a much better four minute stretch proceeding that initial struggle, but Iowa was able to maintain their eight point lead with just under 11 minutes remaining in the first half.

Iowa was able to push their advantage all the way up to 13 with 4:44 left in the half, but Wisconsin cut into the deficit slightly because of a 9-2 run, and went into halftime down nine after Iowa hit a late three.

Wisconsin goes into halftime down nine, 36-27.

The #Badgers finished by making 5 of their last 6 shots, but Luke Garza’s scored 17 points and grabbed six boards in the first half.

Coming out in the first half, Iowa was able to stay ahead of Wisconsin with a 43-32 edge at the first media timeout.

By the second media timeout though the Badgers had trimmed the Iowa lead to only four points, as the Hawkeyes were only 1-of-11 in that key stretch of the game.

The two teams would go back-and-forth with three point makes coming out of that timeout, with Brad Davison dueling Joe Wieskamp, but Iowa would keep the Badgers at an arm’s length to take a six point lead with under seven minutes to go.

Over the next few minutes Iowa would continue their three-point barrage as Wieskamp was unconscious from deep to regain a double-digit lead with 3:43 left to play. Iowa would throw it into cruise control from that point on to head back to Iowa City with a 15-point win over the Badgers.

Led by Luka Garza the Hawkeyes came into the game with the best offense in the country. And against Wisconsin, Garza did not disappoint.

The front runner for the Wooden Award, Garza was unstoppable against Wisconsin. The Iowa big man did most of his damage inside, but he also went 3-of-4 from three in the first half as well. His talent was on full display against the Badgers, and his play was a big reason for the lopsided game.

Overall, Garza finished with 30 points and grabbed eight rebounds. His ability to play inside out and force Wisconsin to close on him aggressively opened up shooting opportunities for Joe Wieskamp, who absolutely killed the Badgers by shooting 5-of-6 from behind the three-point line.

Garza was by far the best player on the court on Thursday night, and he helped give Iowa a 26 to 14 scoring advantage in the paint. The Badgers did not have an answer for him all night long regardless of who was guarding him.

The Badgers couldn’t buy a bucket in the first half.

The duo of D’Mitrik Trice and Micah Potter kept Wisconsin afloat in the first half, as they were the only two players that shot above 35% for the half. In fact the two seniors combined to score 19 of the teams 27 first half points on 6-of-12 shooting, while the rest of the team was a frigid 3-of-24 from the floor.

The unsettling part of the shooting struggles for the Badgers was how frequently the misses came on good looks. This season Iowa allowed a Big Ten worst 73.5 points per game, and Wisconsin was unable to take advantage of some fairly easy scoring opportunities.

Early in the second half the roles completely reversed.

Iowa came out of the half and only made four of their first 14 shot attempts, and allowed Wisconsin to work their way back into the game.

To conclude the game though Iowa would get hot again from three-point range, and the Badgers would go on to miss 10 of their next 11 shots and finish the game shooting a paltry 30% from the floor and 58.3% from the free throw line.

Comparatively Iowa shot a ridiculous 12-of-19 from behind the arc to help them cruise over the Badgers.

Let’s not forget that Iowa has statistically one of the worst (if not the worst) defenses in the B1G, and the #Badgers are now shooting 14.8% tonight.

Iowa up 22-13 as Wisconsin is hanging around despite the poor shooting.

Iowa was able to jump on the Badgers early with an 11-3 lead that included a 11-0 run. From that point forward Wisconsin was in a bind trying to play catch up all game long against a very talented offensive team in Iowa.

Wisconsin is not built to come from behind and outscore teams, making that opening stretch so brutal for Greg Gard’s crew. The Badgers were able to claw their way back into it, but in the end Iowa was able to ride that hot start all the way to the end.

Outside of the shooting struggles, Wisconsin was able to do some decent things on the offensive glass and only turned the ball over five times. However, they dug themselves into a hole that proved to be too deep in the opening minutes of the game.

Cold start for the #Badgers, as they are currently 1-of-9 from the floor, and Luka Garza is already up to six points and three rebounds.

Up next: Wisconsin will have a quick turnaround, and head back out on the road to take on Northwestern on Sunday. Tip-time is set for 6 p.m. CST, and the game can be seen on the Big Ten Network.

Clemson football: Second year players that will be all-time greats – Rubbing the Rock
What does USC football success look like in modern college football? – Trojans Wire