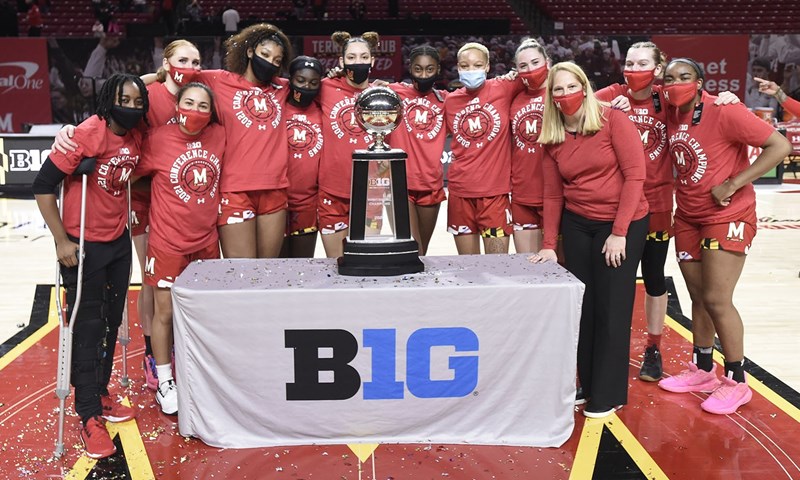 The Big Ten Conference has announced the full bracket for the 28th Big Ten Women’s Basketball Tournament that will take place March 9-13 at Bankers Life Fieldhouse in Indianapolis.

Maryland (21-2, 17-1 Big Ten) is the No. 1 seed for this year’s tournament after securing the outright Big Ten Championship, its third in a row and sixth in seven years with Saturday’s 88-61 win at home over Penn State. Along with their six conference titles, the Terrapins have won four Big Ten Tournament championships (2015, 2016, 2017, 2020) since joining the conference prior to the 2014-15 season.

Maryland will open tournament play at 11 a.m. (ET) Thursday with a quarterfinal contest against the winner of the second-round game between No. 8 seed Nebraska and No. 9 seed Minnesota.

Indiana (18-4, 16-2) is the No. 2 seed for this year’s Big Ten Tournament after the Hoosiers finished second in the conference standings, their highest placement since sharing the Big Ten title in 1982-83 and set a school record for conference wins in a season. Indiana, which advanced to the Big Ten Tournament semifinals last year for the first time since 2006, will tip off its postseason schedule at 6:30 p.m. (ET) Thursday with a tournament quarterfinal game against the winner of the second-round matchup between No. 7 seed Michigan State and 10th-seeded Penn State.

Rutgers (14-3, 10-3) earned the No. 3 seed for the Big Ten Tournament, ending the regular season on a nine-game winning streak to match the program’s highest finish (third) since joining the Big Ten in 2014-15. The Scarlet Knights will play in the last Big Ten Tournament quarterfinal against either No. 6 seed Iowa or No. 11 seed Purdue on Thursday night, 25 minutes following the completion of Indiana’s quarterfinal.

Rounding out the top four seeds in this year’s Big Ten Tournament is Michigan (14-4, 9-4), which claimed the last of the tournament’s double-byes into the quarterfinal round by virtue of Saturday’s home win over Northwestern. The Wolverines have advanced to the Big Ten Tournament semifinals the past two years and will open this year’s tournament slate Thursday afternoon in the quarterfinals against No. 5 seed Northwestern, No. 12 seed Illinois or No. 13 seed Wisconsin, playing 25 minutes after Maryland’s game has concluded.

All 12 games of this year’s Big Ten Tournament will be televised live to a national audience, with the first round and opening two second-rounds games on Tuesday and Wednesday broadcast on BTN. FS2 then takes over as the presenting broadcast outlet, televising the remaining two second-round games, as well as the quarterfinals and semifinals from Wednesday through Friday. All BTN and FS2 games can also be seen live on the FOX Sports app. The Big Ten Tournament championship game will be played at 2 p.m. (ET) March 13 and will be televised live on ESPNU, as well as the ESPN app.

The Big Ten Conference has announced it will allow a limited number of fans to attend the 2021 Big Ten Women’s Basketball Tournament. Following approval by the Marion County Health Department, the decision to allow a limited capacity of 2,500 attendees was made jointly by the Big Ten Conference Directors of Athletics and the Council of President and Chancellors in consultation with the conference office.

A limited number of single-session tickets are now on sale to the general public through Ticketmaster and in-person at the Bankers Life Fieldhouse box office. Further details can be found on the official Big Ten Women’s Basketball Tournament Central page at bigten.org/wbbt.