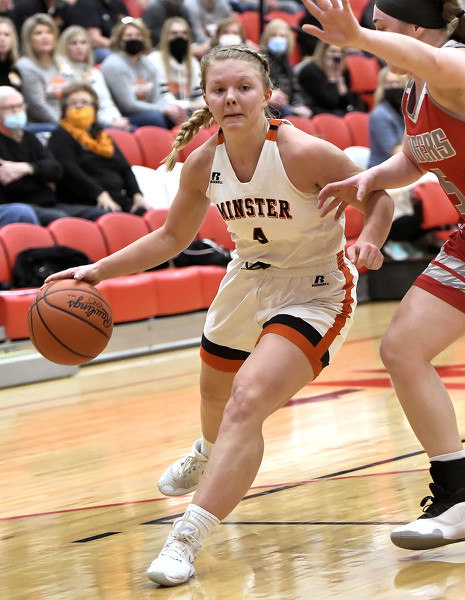 After winning 100 games over four years with the Minster girls basketball team, Ivy Wolf can add one more accolade to her storied career.

Wolf is The Daily Standard Dream Team Girls Basketball Player of the Year for the second year in a row after another dominant season for the Wildcats, who made it to the Division IV regional semifinal before falling to eventual state champion Fort Loramie. Both of the Wildcats’ losses in the 2020-21 season came at the hands of the Redskins.

“I’m just proud of where the teams I’ve been on have gone,” Wolf said. “I’m proud of the memories I’ve made, and the relationships with the coaches I’ve had, because they’ve pushed me and made me a better player.”

After Minster (24-2) came out undefeated from the Midwest Athletic Conference and won its sixth consecutive district title, Wolf’s coach, Mike Wiss, earned Coach of the Year honors for the second time, with his first win in 2017.

Under Wiss’ direction, Wolf and the other seven seniors in the class of 2021 went 100-11 with two state championships and a regional title.

“It’s just been a privilege to coach them,” Wiss said. “That said, it’s about more than the wins and losses. Sometimes it’s about the memories and relationships that are made throughout the course of the year. We had bunches of those over the last several years.”

Wolf was the field general for the Wildcats, directing a lethal offense and bringing an edge to the Minster defense. At times, she ran circles around the competition, such as a Jan. 28 game against St. Henry, when she outscored the Redskins 29-26 despite sitting for most of the second half.

She topped local leaderboards in field goal percentage (53.2%) and assists (5.2 per game) and finished second in scoring (20.8 ppg) and 3-point percentage (45.8%). On the defensive end, she tied with teammate Janae Hoying for the local lead with 4.0 steals per game.

In the regional semifinal, Wolf passed Lauren (Shenk) Miller’s record for career points with a free throw late in the first quarter, finishing as Minster’s all-time leading scorer with 1,685 points.

“Those were 1,685 points that people saw her score,” Wiss said. “Imagine how many points were scored when nobody was watching, to be able to get that good. That’s what good players do. They get themselves in the gym and make themselves better.”

No discussion of Wolf would be complete without mentioning Hoying, the other standout guard for Minster. On those rare occasions when Wolf wasn’t putting up points, Hoying made opponents pay.

The two also made each other better over 10 years of playing together, starting in fourth grade with the Dayton HoopStars.

“We have a friendly rivalry, a competition in our friendship,” Wolf said. “We’re always trying to better each other and always trying to beat each other, and that’s always in the back of our head and that just makes us better. But if one person falls, we’re right there to pick them up.”

Wiss has now reached the regional final in all five seasons since he took over for Nann Stechschulte, who now serves as an assistant coach. Wiss’ team finished 9-0 in the MAC and ran through a gauntlet of the best local teams in the tournament, beating Fort Recovery 50-32 in the district semifinals before a 53-33 win over New Knoxville gave the Wildcats the district crown.

“That’s a big thing for us, because you’ve got to go back through the MAC again,” Wiss said. “That district at Wapak, it gets tough, it gets rough. That’s why we pride ourselves with playing in the MAC.”

Wolf credited their success to the balance between Wiss and Stechschulte, whose contrasting styles help keep the Wildcats motivated and confident.

“Coach Wiss is very calm and collected,” Wolf said. “He knows when he needs to use his big loud voice and when not to, and then we have Nann, she’s always lighting the fire in everybody’s butt. So just to have that two ends of the spectrum is really good for us…

“The culture that they’ve created for the past 25, 30 years is something that a lot of people want to be a part of, and to be able to play for them is very special.”

Wiss had a unique challenge this year, with the summer all but a loss and COVID restrictions limiting team workouts until shortly before the season.

Minster also had something to prove after the pandemic wiped out a chance to defend back-to-back state titles in March 2020, with the Wildcats on the way to the state semifinal when the announcement came down.

“We didn’t go to camp, there were no college camps, etc., to go to,” Wiss said. “The amount of time you spent with your kids or the amount of time kids got to work on their game with their coaches present was limited. So it was a very different several months leading up to the season, let’s put it that way.”

For Wolf, who will continue her career at Miami University, senior year was also a moment to be mindful of her legacy at Minster, particularly in the teammates who will try to continue this historic run.

“I think just building up people’s confidence around me, giving them the confidence to be able to help out the team in any way they could, that was kind of a big thing for me,” Wolf said.

In late November, the Wildcats had multiple opponents cancel to start the season and were still getting their sea legs in the first matchup with Fort Loramie, which came in Minster’s third game.

The second meeting with Fort Loramie was more competitive. Minster was clinging to a narrow lead at the start of the fourth before the Redskins’ defense clamped down, and Wolf’s three with 4:46 left marked the only points the Wildcats scored in the quarter as the game slipped away.

It was the first postseason loss for Wolf and the other seniors, who finished 22-1 in the postseason.

“Might not have been the way we wanted to go out, we would have loved to have another week,” Wolf said, “but we’re super proud of what we’ve accomplished and excited for what’s next.” 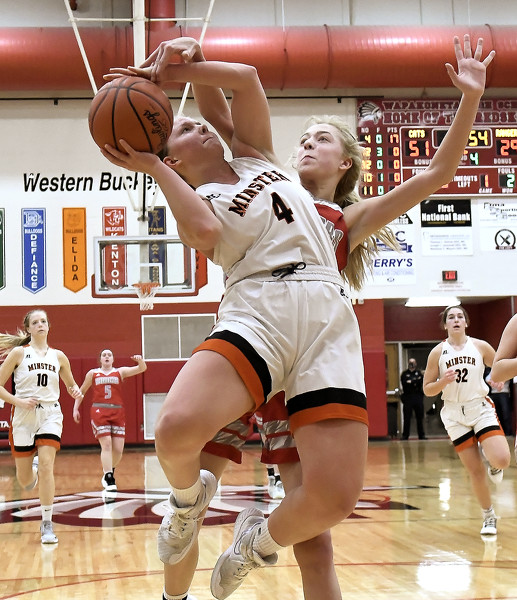 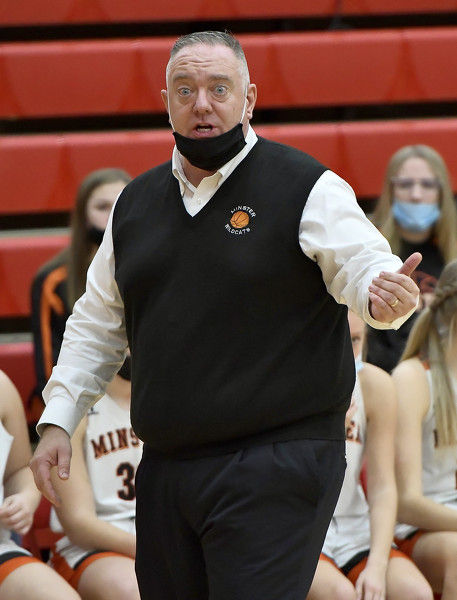