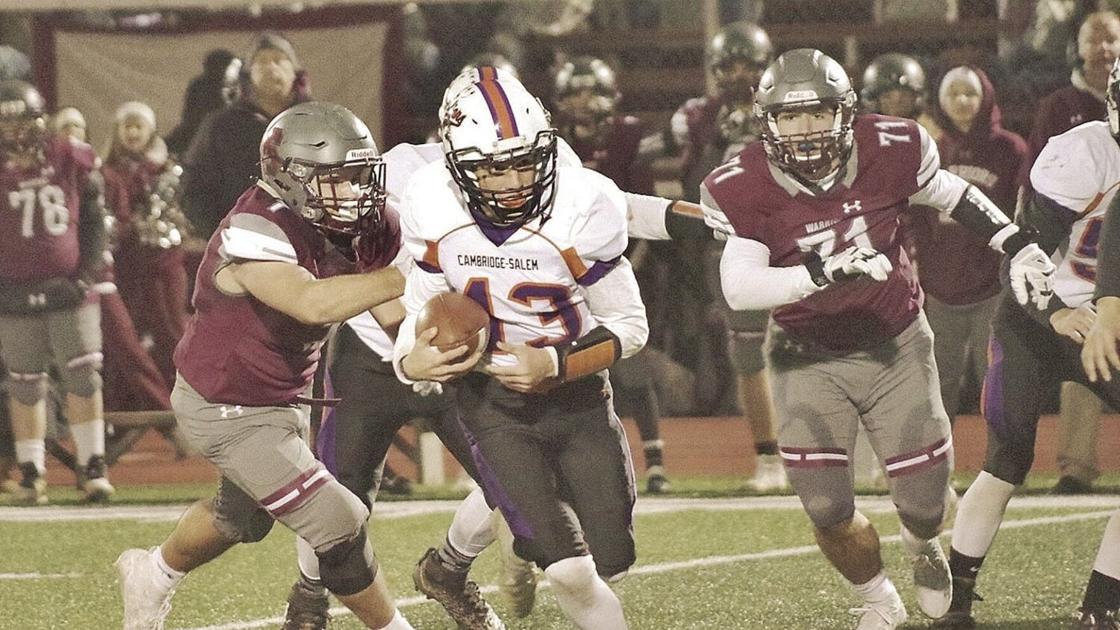 Cambridge-Salem opens its season on Saturday against Ravena-Coeymans-Selkirk and hasn’t been able to step onto the field in any of its nine practices to date.

The conditions are opposite. Typically, preseason falls during August heat and as the season progresses the autumn chill gets more and more prevalent.

Now, teams are conducting their preseason practices in freezing temperatures.

“We went outside yesterday and it was absolutely freezing,” Luke said.

Cambridge-Salem is coming off an 8-2 season, losing to Stillwater 21-0 in the Class C Sectional II final.

They return starting quarterback Jacob Ruggles from last year’s squad. Other than that, there will be a lot of new faces.

“I’m not sure if we have another starter coming back,” Luke said. “This is a really new group.”

It may be a new group to the varsity level, but the players rising through the ranks are from the junior varsity team that went undefeated last season.

Luke said he has the largest offensive line he has ever seen during his time at Cambridge, averaging at about 240 pounds per starter.

It has been over 16 months since the team has taken a competitive snap in a game. Luke has his concerns over the overall shape players are in.

“The hardest part has been conditioning, we have kids — probably 90 percent of the kids –that haven’t done a damn thing since they left school last March,” he said. “ That’s probably the hardest part right now is trying to get these kids in shape, so they can go out and actually play a game and be able to actually finish it.”

The small things that weren’t possible due to the pandemic this year, like summer weight lifting programs, could play a big role in how this season progresses.

“My biggest concern is just the injuries and stuff like that,” Luke said. “They’re not used to getting hit, we haven’t done anything in a long time.”

Cambridge-Salem hasn’t been able to go fully live once this year, and most likely won’t have the opportunity before Saturday’s season opener.

“We’ve done some hitting with shoulder pads and stuff like that but as far as somebody really getting hit, that’ll happen Saturday for probably the first time,” Luke said.

That is unprecedented at any level of football.

It’s tough for teams to know what they have prior to its first game of the season. Playbooks are getting condensed.

Cambridge-Salem will have had 12 or 13 practices before its first game, much less than years prior. They also only get two hours a day, where in year’s past they had double that in the preseason.

That leaves little time to scout opponents and implement their own plays.

Additionally, some players wrapped up their winter-sports seasons just days ago. Luke said he had about four or five wrestlers, and about the same number of basketball players who are playing football.

Those seasons overlapped this year with the unique scheduling layout. Some players were heading to their winter practices, and going to football practices afterwards.

Others, mostly the Salem athletes, focused on finishing up their winter sports before joining the football team.

Despite the unique challenges, having a football season this year is an unexpected surprise to Luke.

“I think a lot of us just didn’t expect that to happen with everything that’s been going on with the state shutting down,” he said. “We never really expected to be playing this year. So, no matter what happens, it’s nice just to get out there and give the kids a chance, especially the seniors that didn’t have the chance. We’re all excited to get out there and play.”

Luke said his team will take it one week at a time.

“The overall goal is win the next game,” he said. “And then if we can get that done, we want to win the next game. You take it one at a time and at the end, you find out what it is like. You hope that it’s a good season.”

ROSTER (ACCORDING TO MAXPREPS.COM)