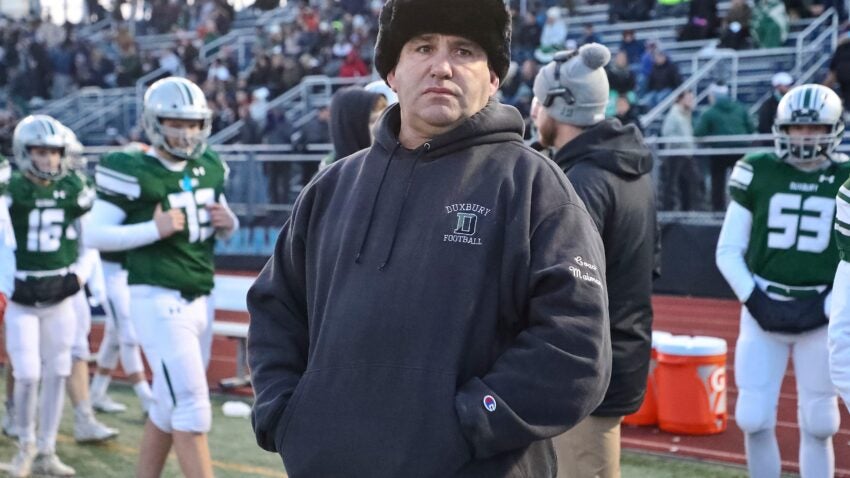 Duxbury High officials are addressing an incident in which “highly offensive language” was used by its varsity football team, some with religious connotations, as part of play-calling in a season-opening game at Plymouth North on March 12.

“It is important to note that while the players clearly demonstrated poor judgment, the responsibility for this incident also lies with the adults overseeing the program,” said the release. “In short, this was a systemic failure.”

The language, according to the officials, was not directed at Plymouth North or any individual, but they said there is “simply no excuse for it.”

“Behavior that promotes anything less than full equity and inclusion is an attack on the core values of the Duxbury Public Schools and is inexcusable. “We need to live these values, and we need to act accordingly.”

In a statement to the Globe, head coach Dave Maimaron said “I want to extend my apology for the insensitive, crass, and inappropriate language used in the game on March 12th.

“The use of this language was careless, unnecessary and most importantly hurtful on its face — inexcusable. The staff and the team have been transparent and cooperative with administration during this time, and we have taken responsibility for the incident. We are dealing with this as a team and focusing on the lessons we can learn from this.”

Maimaron, who was not on the sideline for Friday’s 37-0 win over Silver Lake, said the incident does not reflect the values of the football program, the school, or the town.

“As a special education teacher and a coach, with a multi-racial family, I have a lengthy record of helping students and athletes of all races, religions and capabilities to become the best they can be,” he said. “I view the football field in particular to be the largest classroom in the school and have developed an inclusive program that welcomes, and makes part of the team, any student who wishes to participate.”

School officials wrote education is needed for all members of the program. Duxbury is arranging a mandatory training for the team in the near future, and the administration will look into how to integrate diversity, equity, and inclusion into all of the athlete and co-curricular programs.

“Unfortunately, incidents such as these happen far too often, and we need to do better,” the administration release said. “Words matter and ignorance can no longer be an excuse. As educators, we are firmly committed to leading this effort, but it will take the support of the entire Duxbury community if we are going to make our town a place where all are truly welcome.”

Maimaron said the football team welcomes the opportunity to participate in sensitivity and diversity training and learning from the issue.

Plymouth North principal Pete Parcellin told the Globe, “We’ve been in contact with the administration at Duxbury, which has been super-cooperative all week. For our part, there’s not a whole lot here that’s happened except for us being up to date with them. The administration over there has been really thoughtful and cooperative throughout the week.”

As of Monday afternoon, Maimaron was unsure if he would be on the sideline when Duxbury hosts Patriot League rival Hingham Friday night.