Girls’ Basketball Team: Out Of Quarantine And Into South-West Conference Playoffs – The Newtown Bee

Girls’ Basketball Team: Out Of Quarantine And Into South-West… 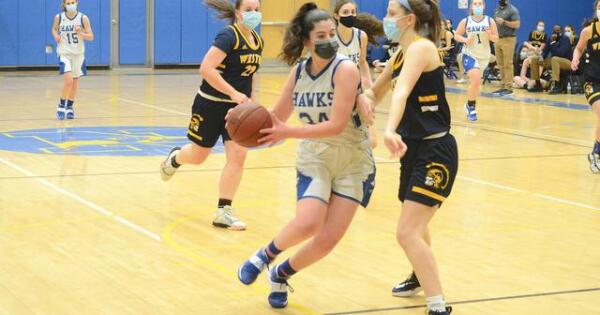 After missing out on a trio of games canceled due to coronavirus protocol, Newtown High School’s girls’ basketball team returned just in time for a morning practice the day of a makeup game with Bunnell of Stratford on the last date of the regular season.

“It was great to come back and play, but today was like day one all over,” Newtown Coach Jeremy O’Connell said after his team shook off some rust en route to a 56-37 win over the visiting Bulldogs on March 13.

With the postseason getting started, the Nighthawks used limited time and opportunity to try and get back into the top form they were establishing just before the hiatus.

Newtown opened the South-West Conference playoffs with a home tilt against Weston on March 16 and won 38-26. Newtown is the fifth seed and Weston the 12th seed.

Newtown advances to the Friday, March 19, quarterfinals and a trip to No. 4 New Fairfield at 6:30 pm.

In the win over Bunnell, it was only a single-digit lead through three quarters, 38-30 Nighthawks, before the hosts pulled away with a 9-0 run to start the fourth. Newtown started to click in the late stages of the game. Maddie Patrick’s long pass set up Julia Gerace seconds into the final stanza, Gerace’s 3-point play the old fashioned way, Patrick’s bucket following an Allie Bradley steal, and a pair of Chloe O’Connell free throws capped the run just 1:11 into the final period.

The Nighthawks jumped out to a fast start against Weston. O’Connell said the first four minutes were the best basketball his team has played this season. Things were a bit sloppy thereafter, the coach said, although Newtown did build a 26-7 lead at the half.

Weston climbed to within nine points in the mid to late stages of the fourth quarter. A Magazu 3-pointer pushed the lead to a dozen, 36-26, with 2:06 left and pretty much ended any legitimate Weston comeback hopes.

Magazu had ten points, Julia Gerace and Patrick both scored eight, and Bradley dropped in six against Weston. Patrick and Magazu both had three steals in the win.

Newtown is trying to overcome not just the opposition but also losing its endurance during the time away from the court. Pushing the tempo and wearing down opponents is the team’s typical ticket to success.

“We just need to get our legs back under us,” said O’Connell, adding that his squad looked uncharacteristically tired late in the game with Weston.

“This year we’re going to have to find other ways to be successful,” said O’Connell, adding that doing all of the little things, such as rebounding and positioning, the add up will be essential.

“There are no excuses during the playoffs. You’ve got to find a way to grind it out,” the coach said.

Julia Gerace takes on a Weston defender and goes for two points during Newtown’s SWC playoff game win on March 16.

Emma Magazu starts up the court as the Hawks look to score.

Maddie Patrick dribbles toward the hoop.

Kristen Reisert drives to the basket for two points.

Emma Magazu makes a strong move to the basket.