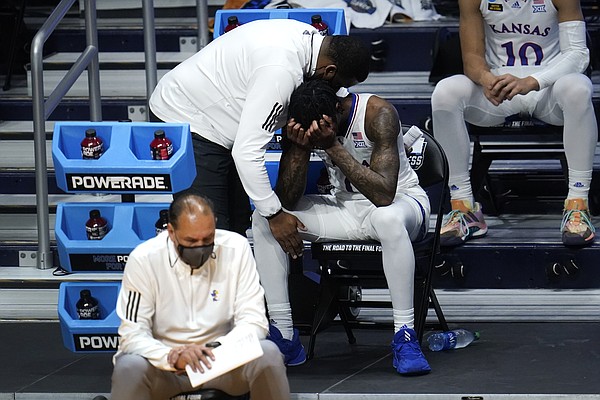 Kansas guard Marcus Garrett (0) is comforted by staff during the second half of a men’s college basketball game in the second round of the NCAA tournament at Hinkle Fieldhouse in Indianapolis, Monday, March 22, 2021. USC won 85-51. (AP Photo/Paul Sancya)
by Associated Press

Indianapolis — The reality of what was coming showed on Kansas senior Marcus Garrett’s face throughout Monday’s 85-51 loss to sixth-seeded USC at Hinkle Fieldhouse.

A flinch here. A grimace there, both admissions of frustration without the utterance of a single word.

But as long as there was still time on the clock, there also was still work to be done, so Garrett never let the sadness hit him.

When it did, at the end of the kind of NCAA Tournament loss not often experienced this early by teams seeded this high, the emotions overwhelmed him.

First, on the Kansas bench after he had checked out for what could be the final time in his KU career.

With his face resting in his hands, Garrett leaned forward in his chair and tried to collect himself while being consoled by KU assistant Jerrance Howard.

Later, after the teams shook hands when the game went final — one ecstatic to be moving on and the other preferring to be anywhere else — Garrett hustled his way to the KU locker room, wrapping his head and face in a towel along the way.

It remains to be seen what Garrett’s future holds. He went through Senior Night festivities back in late February and may deem that he’s ready to take a stab at a professional career, be it in the NBA or overseas.

But he also has the option of coming back to Kansas for one more run, thanks to the COVID-19 waiver that the NCAA provided all athletes who competed during the 2020-21 season.

These types of decisions are never made in the emotional moments that follow such heartbreak and disappointment. And Garrett said before Senior Night that he would talk with his family and Self after the season about what comes next.

But it sure sounded on Monday night like Garrett at least is leaning toward leaving.

Although he has been very open about how much he would enjoy coaching Garrett for another year, Self is not naïve and he, too, seemed well aware that Monday could have been the end of the line for the coach and player who forever will be linked as defensive-minded basketball men.

“If this is his last game — I know he’s got a decision to make — I’m really proud to have been his coach,” Self said Monday night. “Jayhawk fans should be very proud of him, as well.”
Because Garrett never has shied away from any moment — on or off the court — he sat there after what had to be the hardest loss of his life and answered questions about what went wrong against USC.

There were questions about the Trojans’ length, inquiries about why Kansas couldn’t make a shot and even a question about what junior guard Tyon Grant-Foster gave the Jayhawks on a night when the seldom-used reserve scored seven points in nine minutes, none of which came with the outcome in doubt.

Garrett answered them all — even the question about Tyon — demonstrating that, even in one of the most agonizing moments of his career, he was able to focus on what needed to be done and deliver.

That’s part of what always made Garrett one of Self’s favorite players. But only part of it. “I totally appreciate his abilities, what he gets out of himself each and every day,” Self explained.

“I just feel like we fell short today,” Garrett said.

And then he elaborated, adding, “We kind of picked the wrong day to not make any shots, and the other team was making everything that they shot. We could never get the game back from them. They kept hitting shots and doing everything they wanted to offensively.”

As has been common throughout their time together, Self conveyed similar thoughts about Monday’s loss.

After the loss, however, all of that — the missed shots, the overmatched defense, the sloppy fouls and sluggish start — seemed less important than the bigger picture of the connection between Garrett and Self.

“He gave me the opportunity,” Garrett said, with a hint of the emotion that had overcome him earlier sneaking back into his voice. “He changed my life. I’m actually going to be the first person in my family to graduate in May. I really appreciate what him and the coaching staff have done for me and my family over these past four years.

“The way he taught me how to be a man, really. Coming from where I come from, you really don’t know a lot about being a man, things outside of basketball. But Coach Self taught me everything.”

Now it’s time to find out if there are any more lessons in their future together or if the student has passed all of his classes and is ready for the next chapter.