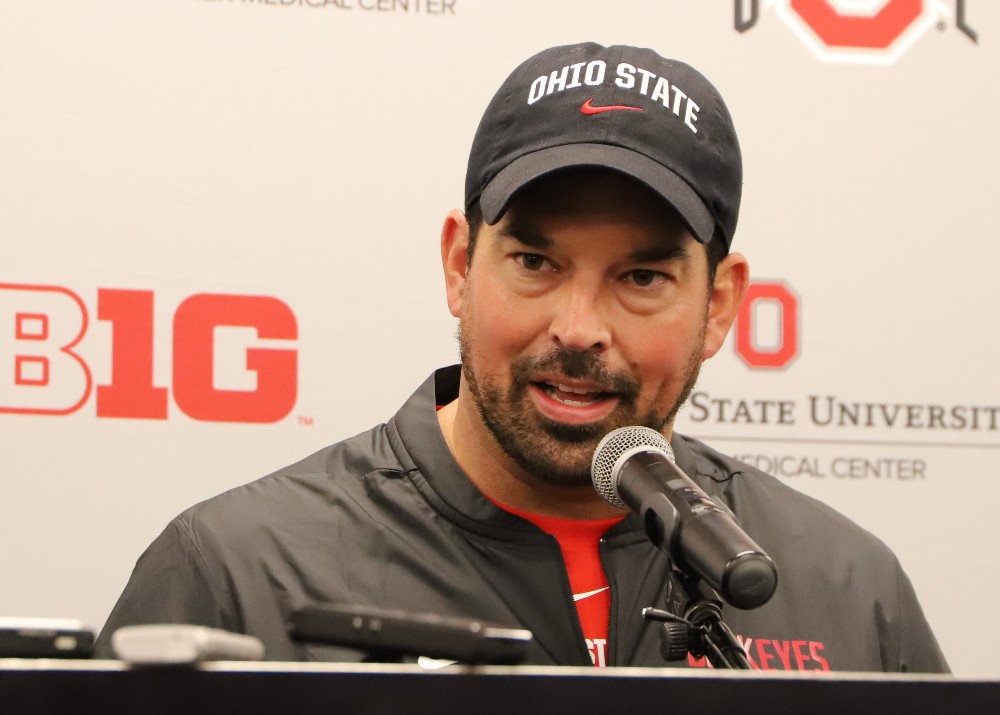 Quarterback competition –  With the departure of Justin Fields for the NFL there is plenty of interest in who the quarterback will be at Ohio State next fall.  Freshmen C.J. Stroud and Jack Miller were on the roster last season and in normal years that would be an advantage they would have over newly-arrived freshman Kyle McCord. Last year was anything but normal however.  According to Day that normal advantage is diluted some because the two that were on the roster last year simply didn’t get the reps and also didn’t get as much exposure to Fields that would normally take place in a non-pandemic year.  That being said, Day reports that all three candidates look good throwing the ball and doing the things a quarterback has to do. What will eventually separate one from the others are the intangibles such as leadership, learning from mistakes and the ability to prepare. Most of all, the ability to value the football and not turn it over will be a huge determining factor. Day explained that the job will not be won in a day or on a single play,  no matter how good that play is. What will matter is who puts together the best body of work over a period of time and who continues to show that they can learn and improve. Because of that approach,  naming a leader for that position just isn’t possible yet. The eventual regular starter may not be really settled until after several games are played next season.

Stover in the pipeline – The Buckeyes were hit hard by graduation at the tight end position and are looking for depth behing returner Jeremy Ruckert.   In anticipation of that need linebacker Cade Stover was asked to  move to tight end last year to provide some depth this year. Day says he likes the progress Stover has made. “He’s worked very hard,” said Day. “This is going to be a very big year for him. He’s poised for a big season.”

Young DBs to watch – Like the tight end position the Buckeyes are looking for new faces in the defensive backfield this spring.  Day was asked about two in particular, corner Legond Cavasos and safety Lathan Ransom.

“He has flashed and done some good things early,” said Day of Cavasos, “but his consistency has to improve.  It can’t be just one or two plays. It has to be every play. We’re going to face some great competition this fall so at that position you have to be on your game every play. That’s what he has to work on,” said Day.

Cavasos saw very little action last year but its a bit of a different story with Ranson. He was called upon late in the year when injuries required OSU to go deep into the depth chart. Ranson responded well and seemed to have the knack of making key plays in big games including gthe national semi-final game against Clemson when he played very well late in the game.

“He really came on and played well for us against Clemson,” said Day. “To see him play like that was really encouraging. He has a really bright future.”

Interior Offensive Line – The Buckeyes return their starting offensive tackles but have some retooling to do in the middle of the offensive line. To complicate matters returning starting center Harry Miller is out this spring with an injury.  In Miller’s absence guard Matt Jones has moved over to center. Coming out of high school Jones was rated the top center prospect in the nation though he has played at guard during his OSU career. Day has liked what he has seen of Jones at center. “Matt has done very well,” said Day.  Luke Wypler is also getting reps at center, and like Jones, was considered the top center prospect in the nation when he came out of high school.  “Luke is getting stronger,” said Day. “That’s what he needs to do.”  Day also mentioned freshman Jakob James as performing well at center.

Where the Young Guys Have to Shine – Spring is always a time of year when new faces and names come to the forefront.  Certainly that is true at quarterback this year, but there are other positions where that will happed either due to need or due to young talent at those positions. “The three receivers that came in last year are really good,” said Day, “and we have two young guys at running back that look like they are really talented.  We need some new guys to step up on the defensive line and some in the secondary,” Day said. The receivers Day was referrencing are Julian Fleming, Gee Scott and Jaxon Smith-Njigba. The running backs are TreVeyon Henderon and Evan Pryor.

Texas basketball could swing for the fences with UK’s John Calipari – Hook’em Headlines
Chattanooga Football Opting Out of the Remainder of the 2021 Spring FCS Season – University of Tennessee at Chattanooga Athletics – GoMocs.com