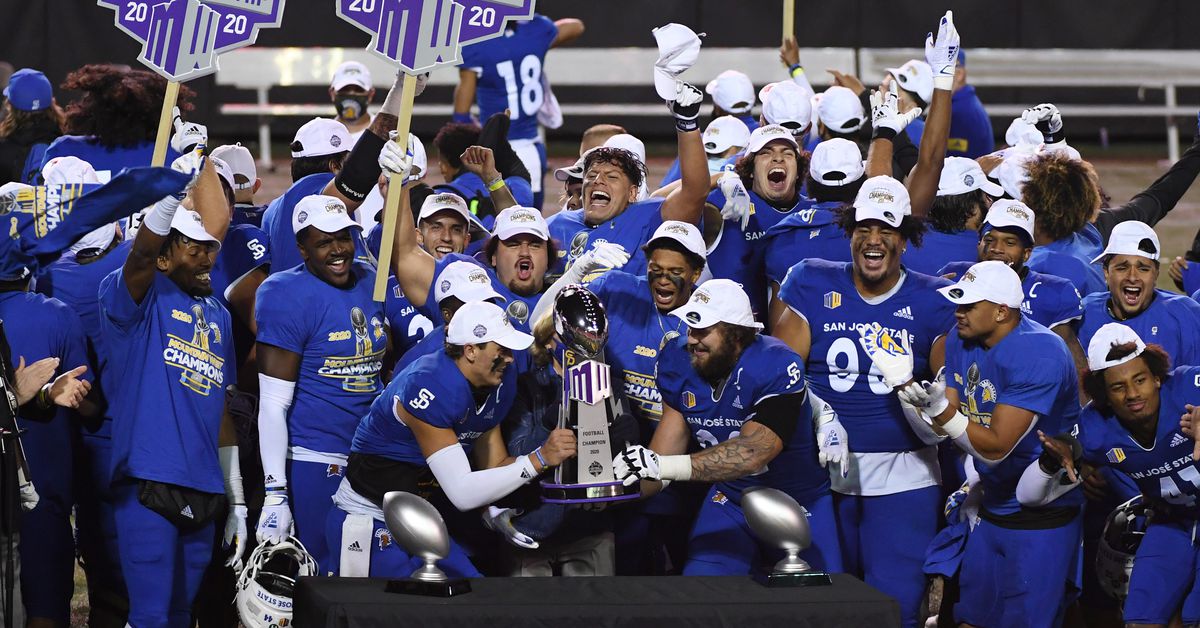 As spring has sprung for football, it’s not too early to anticipate any continuity challenges the Spartans may face this fall as they aim to repeat as Mountain West champions.

Early predictions and analytics usually favor the difficult side. But a bias of being closer-in hopefully balances out this review.

People will be curious if the great success of 2020 was an anomaly or if a championship-caliber program will keep rolling.

Also, the turnover of players and assistant coaches seems to meet the normal churn rate as any team with the foundational and rebuilding elements still looking good.

Game 1, Southern Utah (FCS) @home: Expectations should have the Spartans heavily and rightly favored. Basically, SJS looks to have a deeper talent base. Regardless, the Thunderbirds have a solid offensive line and an offensive scheme based mostly on cerebral QB play. Defensively, the Thunderbirds do look vulnerable against the run. As a Spartan win is expected, a show of dominance sends all the right messages right out of the gate.

Game 2, @USC (Pac-12): On the flip side on who has the deeper talent base, USC would be favored here. Though the Trojans aren’t the mighty program they used to be, it is still a much-storied program that just fell short of the Pac-12 championship last year. Expect San Jose to fight with the same hunger as when they were downtrodden. At this point, it shouldn’t be a comfortable win for the Trojans or a blowout loss for the Spartans.

Game 3, @Hawaii: The Rainbow Warriors have more good reasons to fight than most teams on an island, literally and figuratively, along with being in the lower-middle of the power rankings. This feels just a bit lesser a rival game than in previous seasons that were hot and heavy. Expect the Bows to have a slow start and or a rocket run they’ve been known for of late. The Spartans should weather it and will treat it again as the business trip it should be to show their run on them last year wasn’t a fluke.

Game 4, @Western Michigan (MAC): The Broncos finished right behind Ball State. Yes, that wrecking Ball State who crushed the favored Spartans in the Arizona Bowl just three months ago. Smashing a MAC opponent can be a form of redemption for the Spartans. In a strange way, maybe it offers some validation for SJS (wishful thinking, but aren’t we all grasping for angles?). The Spartans have every reason and all the tools to beat the Broncos. But the Spartans need to have a solid defensive showing. The Broncos averaged over 40 points a game last season and also have many returning players. The Spartans pull this one out IF their defense shows up and shows out. Otherwise, the edge goes to Kalamazoo.

Game 5, New Mexico @home: This is a Spartan home game that all would expect a gimmie. The Lobos are on the outside looking in terms of rankings but they did surprisingly well against the Spartans last season – though a 38-21 loss to SJS can say otherwise for the Lobos. New Mexico’s 2-5 finish in 2020 was tough, but also never playing at home and losing games by just under 9 points a game says you can’t sleep on them (or anyone, of course). From last year to this year for the Lobos, the angst can carry over and wear on anyone or it can harden a team. But all said, this is that one game of the schedule to more easily count on a Spartan win.

Game 6 @Colorado State: Last season’s Covid-chaos and off-field program challenges first come to mind for the Rams. Though only getting in four games, it was a sporadic 2020 performance overall for Colorado State. There’s much to prove for this program on all fronts. The Spartans should not lose this one if you look at a program that’s considered more seasoned vs. a program that’s seriously regrouping.

Game 7, San Diego State @home: This was the harbinger win for the Spartans last season. A win this season would signal a full change of the guard. Last season’s victory showed clear will and pent-up emotions onto the Aztecs. Years of frustration from the Spartans were released on that night in LA, even moreso when starting QB Nick Starkel went down in the first series. The matchup this season shows on paper to be relatively even, but there seem more questions on the Aztecs’ defense and offense than a more stable SJS all-around.

Game 8, @UNLV: Second-year head coach Marcos Arroyo and Spartan coach Brent Brennan are great friends. Though Arroyo had a not surprising rough first year, his team is right where Brennan was in terms of trajectory a few years ago. Arroyo is also recruiting well and is probably a step ahead of Brennan at that same time. But competitive friends ratchet things up and teams pick up on that vibe. It will be a surprisingly good game that the Spartans can win going away.

Game 9, Wyoming @home: The Cowboys have always been that outlier team that feels it could be a Big 10 or Big 12 team, especially with head coach Craig Bohl. This is a tipping game for the Spartans at the back half of the season. Depending on how SJS is health-wise at this point makes this a challenging game either way. Bohl’s team should be fully back in play after some key 2020 opt-outs return. The early feel here is a swing game that favors the Cowboys.

Game 10, @Nevada: Like SJS, the Wolf Pack have an equally power-packed team returning full force. Last season’s big Spartan win hinged on a huge opening second-half kick return by then Spartan freshman Shamar Garrett and a controversial Wolf Pack fumble seen two different ways depending on your allegiances. A higher objective view says the Spartans were asleep the first half and the Wolf Pack couldn’t psychologically recover the entire second half. Mark this as another great must-see game that’s honestly too hard to call this far out.

Game 11, Utah State @home: The Aggies are a similar question mark as Colorado State. A player-led boycott against discriminatory comments from their school president spoke volumes last season. But with new head coach Blake Anderson, his solid winning history from Arkansas State shows what can be for Utah State. Anderson also seems a similar vein to Brennan’s character, as one who can co-join and lead an organization all-around, which the Aggies need as a whole. It may not make sense to sports-only types, but it matters all the way down to the players who face year-one transition challenges with a new command structure. All told, the Spartans brotherhood at home shows the Aggies want can be. Leaning towards a good win for SJS here.

Game 12, Fresno State @home: Last year, the anticipation for this most real of rivalry games was palpable before it got called off. Those in the Spartan sphere knew and felt a big win over the Bulldogs was inevitable. It was the same pre-game feel against the Aztecs and Boise State. For some evidence, the Spartans’ 2019 last-minute win over Fresno State was a pure will, scratch-and-claw victory that begged a 2020 continuance. This 2021 game is equivalent to a multi-season payback that still trumps any revenge feel the Bulldogs might have. The Spartans expect that same fervor coupled with roster strength and talent to leave the same 2020 taste some teams missed out on.

It should be another winning year – perhaps 8-4 or 7-5 at worst. If things finish this way, naysayers call it a big regression.

The Spartans need to contend for the title again and or be right in the middle of that conversation at year’s end.

In the bigger picture, this program, university, and Northern California needs a generational run from a CSU school like San Jose State to soon match some big, shiny, new digs.