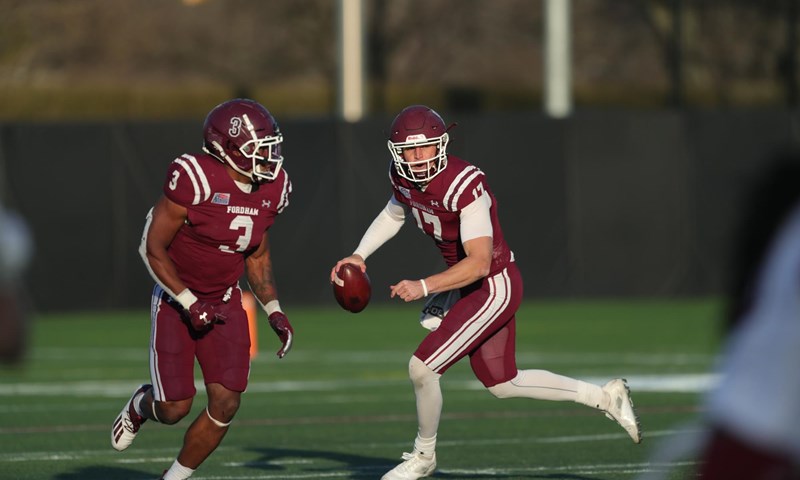 Lafayette placed a League-high 15 student-athletes on the two All-Patriot League teams, including five first-team members. The Crusaders garnered 14 All-League selections with six on the first-team, followed by Fordham with 13 (9 first-team) and Bucknell with 11 (7 first-team). Lehigh and Colgate finished with six and three All-League honorees, respectively.

Patriot League football major awards and All-League teams were voted on by League football head coaches who competed during the spring 2021 season. Coaches could not vote for their student-athletes or themselves.

2020-21 Patriot League Spring Football Rookie of the Year
Matthew Sluka, Holy Cross, Fr., QB, Locust Valley, N.Y./Kellenberg Memorial
2020-21 Stats: 13 carries for 151 yards and two touchdowns, 2-for-3 passing for 33 yards and one touchdown.
*Sluka earned Patriot League Rookie of the Week on March 29 after rushing for a pair of touchdowns and throwing for a third score in a comeback win over Fordham.
*His 151 rushing yards against the Rams was the most by a Holy Cross rookie since 1976.
*The Locust Valley, N.Y. native finished second in the League in rushing yards (151) while posting a League-high 11.6 yards per carry.

2020-21 Patriot League Spring Football Dick Biddle Coach of the Year
Dave Cecchini, Bucknell
*The second-year head coach led the Bison to the South Division title and a berth in the 2020-21 Patriot League Football Championship Game.
*The Bison found a variety of ways to win, totaling 415 yards of total offense in a 38-13 victory over Lafayette and holding Lehigh to 190 yards of total offense in a 6-0 shutout win over Lehigh.
*Bucknell’s defense held opponents to 14.3 points while maintaining a +3 turnover margin, forcing seven turnovers in three games.

Seniors accounted for 27 of the 62 spots on the two All-League squads, while 19 juniors received postseason honors. Fifteen sophomores filled the roster with Lehigh freshman defensive back LaTreil Wimberly as the lone first-year player to be voted onto the teams by the League coaches.