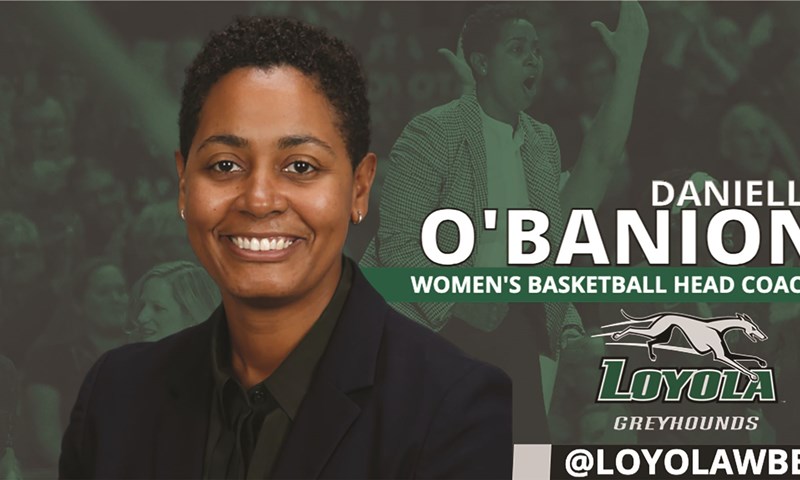 O’Banion brings 20 years of Division I coaching experience to the Greyhounds, most-recently serving her second stint as an assistant at the University of Minnesota over the past three seasons. Her teams have combined for 10 postseason appearances, including five NCAA tournaments and one run to the Final Four.

“I am so excited to welcome Danielle O’Banion to the Loyola Athletics family as our next head women’s basketball coach,” Woodruff said. “It was very clear through our process that Coach O’Banion was the right person to lead our program moving forward. She brings an impressive combination of coaching expertise, successful playing experience and a demonstrated commitment to developing the women in our program as exceptional leaders, student-athletes and citizens while on-campus and well after graduation. The future is very bright with Danielle as the leader of Loyola women’s basketball.”

Originally from Arlington, Virginia, O’Banion returns to the Mid-Atlantic after coaching stints at Minnesota, Memphis, Kent State and Harvard. A standout recruiter who has brought in four Top-50 classes during her career, she has also held multiple leadership positions within both the Women’s Basketball Coaches Association (WBCA) and Advocates for Athletic Equity (formerly Black Coaches and Administrators).

“I believe in Loyola University Maryland, and I am honored that Loyola believes in me,” O’Banion said. “I am especially grateful to Vice President Dr. Robert Kelly and Director of Athletics Donna Woodruff for entrusting me with the future of our Loyola women’s basketball program. Loyola, its ideals and the city of Baltimore are a championship combination, and I am eager to begin the work of building a Greyhounds women’s basketball championship tradition.”

O’Banion rejoined Minnesota in 2018 following a two-year stint as associate head coach at Memphis. During the past three seasons with the Golden Gophers, she worked primarily with the post players while also playing a key role in recruiting. Recent additions to the program include Alexia Smith, the first five-star recruit in program history, and 2020 Big Ten All-Freshman honoree Jasmine Powell.

O’Banion then spent four years at Memphis from 2008-12, earning a promotion to associate head coach and recruiting coordinator for the final three seasons. She helped bring in the No. 1-ranked recruiting classes in Conference USA (Top 50 nationally) in each of her first two years on-campus, and her 2011 recruiting class was the highest-ranked in program history. Those recruits succeeded on the court with Memphis winning 78 games during her four seasons while making three postseason appearances.

In between her two stops at Memphis, O’Banion spent four seasons as head coach at Kent State. She restored roster stability to the program, signing 17 players overall with four going on to play professionally. O’Banion was also active in fundraising, helping secure the largest-ever financial gift to the program.

O’Banion was diagnosed with Stage 2 lymphoma cancer midway through her stint at Kent State. She managed to coach every game while going through treatment, and she announced that her cancer was in remission six months after her original diagnosis. O’Banion was presented with the U.S. Basketball Writers Association (USBWA) Pat Summitt Most Courageous Award for women’s basketball at the 2016 Final Four.

A 20-year member of the Women’s Basketball Coaches’ Association, O’Banion served on the WBCA Board of Directors from 2013-15 and was an Awards Committee member from 2011-12. She was also the second woman to be named president of Black Coaches and Administrators, serving in that role in 2011-12 following four years on the BCA Board of Directors.

O’Banion began her coaching career as an assistant at Harvard in 2001-02, helping the Crimson win the Ivy League and earn an automatic NCAA tournament berth in her lone season with the program.

As an undergraduate, O’Banion was a four-year letterwinner at Boston College from 1997-2001. She helped guide the Eagles to their first two NCAA tournament appearances in program history, and she was a co-captain and Big East Academic All-Star during her senior season. She graduated from Boston College in 2001 with a bachelor’s degree in psychology and Hispanic Studies minor.

O’Banion grew up in Northern Virginia, and she prepped at Episcopal High School in Alexandria, Virginia where she was a Washington Post All-Met guard for the Maroon.

What They’re Saying About Danielle O’Banion

“Danny is the epitome of a team-first player and coach. She’s a phenomenal communicator and motivator, and her life experience as a cancer survivor will undoubtedly impact her student-athletes well beyond the court. At the same time, her basketball acumen and ability to teach the game are beyond reproach. I’m so excited for these young women to get a chance to learn and grow under her tutelage. Loyola just got a rock star.” – Marisa Moseley, Head Women’s Basketball Coach at the University of Wisconsin and former head coach at Boston University (2018-21)

“I am so thrilled for my friend Danielle O’Banion on becoming the next head coach at Loyola Maryland! She is a passionate, driven and talented coach who will continue to impact the lives of her student-athletes as she’s done for more than a decade. Danielle’s ability to connect, recruit and develop talent make her the perfect choice for Loyola. She brings positive energy on a daily basis and can light up the room with her smile and personality.” – Niele Ivey, Head Women’s Basketball Coach at the University of Notre Dame