How an NCAA Basketball Team Relinquished Its Season –… 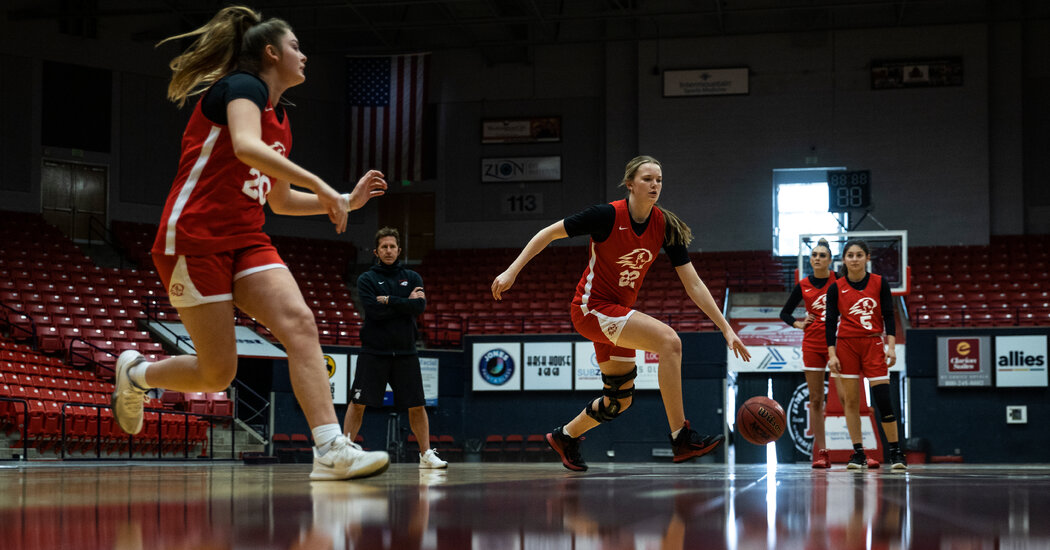 Word had trickled down in late December to J.D. Gustin, the women’s basketball coach at Dixie State University, a southern Utah college making the leap to N.C.A.A. Division I athletics, that some of his players had misgivings about continuing to play during the pandemic.

At that point, most of the players and coaches had previously contracted the coronavirus, and the team had canceled three of its first six scheduled games because of infections. But their Western Athletic Conference season was about to begin, and the coach needed to know where his team stood.

So Gustin handed his players a brief letter he had typed himself. It reassured them that their scholarships were secure but also asked a yes-or-no question they could answer anonymously: Did they want to opt out of the season? He asked everyone to think about it overnight and then fold the papers in half and return them.

The verdict arrived the next day: Eight wanted to play; six wanted to opt out.

“It shocked me,” Gustin said of the divide. “I was reeling.”

Immediately, he began meeting with players individually. One was struggling with online classes. Two had parents who had lost jobs. Some players had injuries that might have been connected to getting sick. Others had lost family members to the virus.

Still, Gustin thought there were enough who wanted to play, and he felt obligated to honor their wishes, too. For some of them, basketball could soothe feelings of isolation.

So on Jan. 3, he sent a letter to the team on university letterhead, breaking down how the team had voted and laying out why he thought the season could go forward. He asked the players to let him know by noon the next day if they were in or out. He closed the three-page letter by writing, “Love you all no matter what.”

The next day after practice, one of the players who had written that she wanted to play asked to speak with him. She said that she actually feared continuing to play, Gustin said, but was uncomfortable expressing that because her parents wanted her to keep going and because her roommate, also a member of the team, favored playing.

That night, Gustin went to athletic department administrators. “I said, ‘We can’t do this,’” he said.

A news release was crafted, and the announcement came the next day, Jan. 5: The Dixie State Trailblazers were canceling their season.

As the women’s national tournament headed toward its championship game on Sunday in San Antonio, and the men progressed toward their final in Indianapolis on Monday night, teams have been lauded for their perseverance in playing during the pandemic. Hundreds of games were postponed or canceled during the regular season; some teams paused their seasons for weeks; and those who advanced to the N.C.A.A. tournaments have been isolated in hotels to avoid contracting the virus.

But not everyone made it to the finish line. Or even the starting blocks. The eight Ivy League colleges were among those that never started, their presidents deeming sports too great a health risk. Others reached the same decision after the season had begun. Including the Ivies, 27 Division I women’s teams and 13 on the men’s side canceled their seasons early because of concerns about the virus, according to the N.C.A.A.

Among the women’s teams were prominent names — Duke, Virginia and Vanderbilt. Varied circumstances contributed to the decisions to cancel: Southern Methodist’s players had previously accused their coach, whose contract was not renewed last month, of abusive behavior; a Vanderbilt player developed a heart condition linked to the virus; Cal State Northridge did not have enough players.

There appeared to be a common factor: The decision was not simple.

“For myself, it’s been an internal battle,” Vermont Coach Alisa Kresge said in an interview after her team had ended its season in late January. Two of her grandparents died in nursing homes from the virus, both of them saying their last goodbyes on a video call. And her players went into quarantine three times, having food delivered and texting roommates with advance notice about trips to the bathroom. But for many of Kresge’s players, who had won three consecutive games when their season ended, basketball was an emotional and mental outlet.

“I sit on the fence every day,” she said. “Are we doing the right thing? Should we be making decisions for others? There are so many layers to this.”

Those conflicts were not exclusive to the teams that gave up their seasons. Mike Krzyzewski, Geno Auriemma, Rick Pitino and Tara VanDerveer, all Hall of Fame coaches, expressed misgivings during the regular season about playing amid the pandemic. And an N.C.A.A. poll released in February, which surveyed more than 25,000 athletes, found that mental health concerns last fall were one and a half to two times more prevalent than in prepandemic surveys.

At Dixie State, worries had percolated for months.

Gustin, in his fifth year as coach, understood from experience that the strands that bind a team are manufactured only partly at practice and in games. In a normal summer, his players would work as counselors at a Dixie State youth camp during the day and play pickup games at night. There would be a team barbecue in August, a retreat to cabins in the hills, tailgating at football games and group outings to student events. Later, there would be Halloween and Christmas parties.

All of that was wiped out in the past year.

When players returned to the campus in St. George for the fall semester, some barriers between teammates, which might already have been knocked down in a typical year, remained standing.

Emily Isaacson was recovering from surgery to repair torn knee ligaments that cut short her freshman season. Isaacson, eager to please and a sharp student from speck-on-the-map Perry, Utah, had poured herself into rehab over the summer. Even if she wasn’t ready to play 40 minutes a game, she was ready to start the season opener. “I was so grateful to be playing,” she said.

MaKayla Johnson, a senior from Fort Worth with a worldly view and a big personality, arrived in far from game shape. Players intuitively know who is laser focused at practice, staying after to take extra shots or getting to the weight room early, but few at Dixie State knew what the pandemic had been like for Johnson.

Her church superintendent and a relative died from the virus in the early stages of the pandemic. Johnson, who has asthma, contracted the virus in June. Her father, who has had two strokes, developed Covid-19 in August, prompting Johnson to return home from campus briefly. Her mother contracted the virus, too. Johnson said she had lost someone almost monthly in the past year.

She has experienced loss before: An older sister died of lupus when Johnson was in the fourth grade. But this was different.

“It’s been kind of tough for me, but basketball has always been a grieving tool,” said Johnson, one of two Dixie State players who had deaths in their extended families. “I’d use it as an escape. Whenever I was dealing with something, it wasn’t hard for me to separate things from inside the lines.”

Johnson said that she had voted to continue the season but that she fully accepted her teammates’ decision to end it.

The ability to compartmentalize — to shut out crowd noise, the pressure of a big moment or off-the-court drama — is often viewed as a valuable tool for an athlete. Few of the Dixie State players do this more adeptly than Isaacson. She had to spend her birthday under quarantine, and then she contracted the virus, with mild symptoms, shortly after Thanksgiving. But she had basketball.

“I wanted to play so badly,” Isaacson said. “Because of my last year, you don’t know what it’s like until you don’t have it. I love basketball. It’s a part of me.”

When Duke canceled its season in December, she thought, “Oh, there’s no way that would ever happen to my team.”

And then it did.

Isaacson, who cried when Gustin told the team its season was over, was angry and frustrated to have lost another season. She was also sad that she didn’t know the depths of the hurt some of her teammates were experiencing.

“That broke my heart,” she said. “I didn’t know teammates had family who were sick and they kept it to themselves. I didn’t want anyone carrying that, thinking, ‘Can I just get through this practice?’ It opened my eyes. I have to realize it’s bigger than basketball.”

Three months have passed since the decision to stop playing.

Everyone in the program has had time to think — particularly Gustin. His teams had improved each season, from five wins to 12 to 15 and then to 18 in 2019-20, the team’s last season in Division II. He went to the W.A.C. tournament in Las Vegas to watch games and meet conference officials. He has spent more time watching film than he can ever remember.

He also spent time reflecting on the decision to stop.

Another coach at the college told Gustin that he would have found kids off the street to keep playing. Though senior administrators were ultimately supportive, there was some initial conflict among them. All of this was taking place in a community where the pandemic was seen, in some quarters, as overblown. “New York City is different from St. George,” Gustin said. “It’s a very conservative, white community.”

There has also been another consideration: his job security.

As a result, he decided to overhaul his roster.

The N.C.A.A. has allowed every athlete in a fall or winter sport to take an extra year of eligibility because of the uncertainties of a pandemic season, but only eight Dixie State players are returning. Some are not having their scholarships renewed for tactical reasons — Gustin wants to play a more up-tempo style. Others were denied because he felt that the players had used the pandemic as an excuse not to work on their skills or physical condition. (He said that only three players, one of whom was Isaacson, had done voluntary individual workouts with coaches in January and February.) Others chose to move on; one player wants to become a firefighter.

The conversations, he said, were often tearful.

“It’s like you’re piling on, but it’s your choice to pile on if you’re me,” Gustin said. “I’m not trying to be a bad guy, but this is D-I basketball. I understand this is debatable, but we needed a fresh start. The past is the past. I respect Covid, but Covid days are over.”

Johnson is among those not returning, a decision she said was hers. She is on track to graduate with a degree in recreation and sports management — she is finishing up an internship at a gym near campus — and wants to transfer to a college near her home in Texas for her final season.

“I’m embarking on a new journey,” she said.

When next season’s Dixie State team held its first practice on March 15, that, too, felt like a new beginning. The Trailblazers will go to Costa Rica in August to play three exhibition games and spend a few days at the beach. It is partially a reward, Gustin told the players, for sticking through the last 12 months.

“That’s something,” Gustin said, “that a coach doesn’t want to hear.”