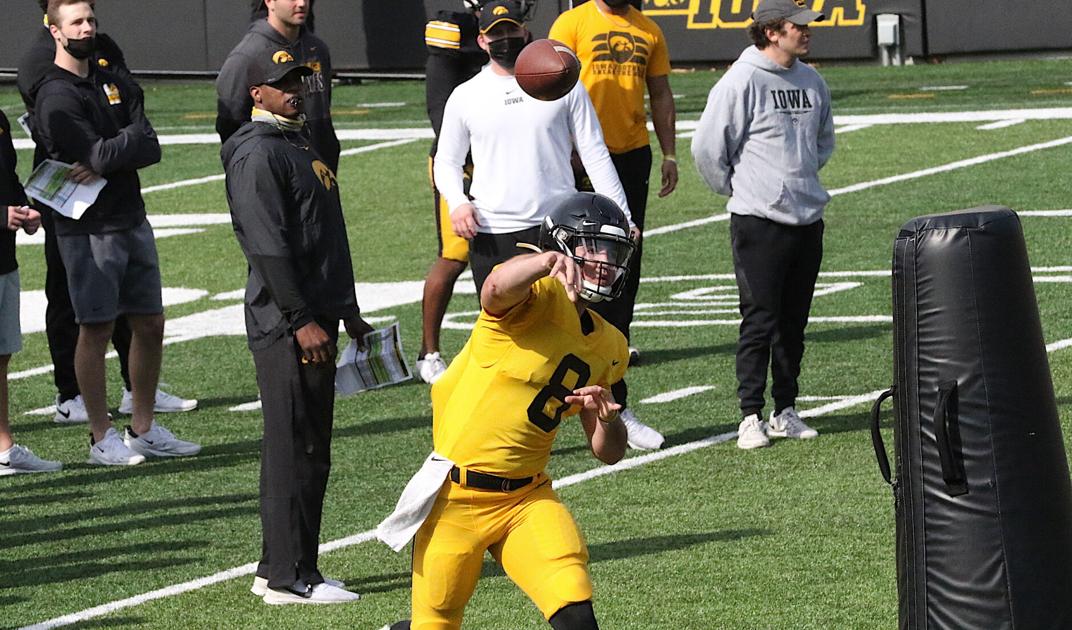 IOWA CITY, Iowa – It was with a refreshing sense of normalcy that I watched Iowa Football practice while roaming the East stands at Kinnick Stadium on Saturday. It’s how I’ve spent at least one Spring day for longer than most of the current Hawkeyes have been alive.

That didn’t happen last year. The pandemic took away many of the regular exercises in our lives. It was great to be back.

You can watch all of the 11-on-11 portion of Saturday’s workout in our video packages. They were broken down by quarterback, so you can see how each performed in five minutes or less. They include running plays, performance in the trenches and everything else we witnessed.

Admittedly, it’s hard to consume everything going on while shooting video and photos of the practice, but I like to share news and observations from these events for fans who can’t make it. They come with a warning label indicating it’s only one of 15 Spring workouts and perspective is needed.

With that in mind, here’s what I have:

INJURIES – For me, this was the most disappointing aspect of Saturday. I felt bad for the players sidelined and for fans not being able to watch them perform.

The two most significant injuries from appearances (coach Kirk Ferentz didn’t provide details on any player’s health status) were Cody Ince and Justin Britt. Ince was listed as the starting right offensive tackle on the pre-Spring depth chart and Britt showed up as the No. 1 right guard.

Ince wore a boot on his left foot Saturday. Britt sat in the stands much of the day and used crutches when on his feet.

Defensive tackles Noah Shannon and Logan Jones, both of whom are on the two-deep, left Saturday’s practice early. Jones’ lower left leg, around his calf, was wrapped in bandages.

Second-team cornerback Terry Roberts did not practice but looked like a coaching gig might be in his future the way he tutored younger members of the secondary. No. 2 running back Ivory Kelly-Martin was out, as expected, as he continued recovering from winter knee surgery.

A pair of ’20 second-year freshmen – Diante Vines and Elijah Yelverton – were in street clothes. Early-enrollees in the ’21 recruiting class – Zach Twedt, Justice Sullivan and David Davidkov – missed a development day.

I will say that outside of Ince and Britt no ailments looked significant. The players I listed above all looked to be moving around fairly well and helping in drills in some cases.

QBs – Everybody wants to know about the quarterbacks. Again, you can watch them for yourselves in the video linked earlier in this piece, but I will share my thoughts.

I would summarize by saying all of the signal callers experienced good and bad moments throughout the morning. I would add the Ferentz indicated, as he had during winter and again last month, that last year’s starter, Spencer Petras, held a significant edge in the competition.

For this one practice, I felt Petras looked like the best of the bunch. He performed especially proficient in the hurry-up offense, which indicated a firm grasp of the system.

I would be pretty surprised if Petras isn’t QB1 come the opener against Indiana. If he were to struggle against the Hoosiers and then the next week at Iowa State, the situation could become interesting.

Alex Padilla has made great strides since I last saw him during the Spring of ’19. His footwork improved as did his ability to work through progressions. His scoring drive on Saturday may have been the best single march any of the quarterbacks enjoyed.

Deuce Hogan showed what you would expect from a player who arrived on campus during a pandemic, missed regular-summer camp, spent the fall on the scout team and missed out in bowl prep reps. The game still was moving fast for him.

That said, you could see the potential. He delivered a couple of impressive passes and showed off a powerful arm.

Walk-on Connor Kapisak received meaningful reps Saturday and acquitted himself well. He showed a solid skill set and grasp of the offense.

TRENCHES: As we most often see in the spring, the defensive line won more battles than it lost against the O-Line. That was reasonable considering two starters were out and there being significant loss from the offensive front following last season.

That said, the D-Line was replacing three starters from ’20, and key pieces like Black and Jones were out Saturday. Returning starting end Zach VanValkenburg and John Waggoner, projected to start opposite him, played well. Waggoner dropped No. 1 running back Tyler Goodson in the backfield for a tackle for loss.

Nick DeJong stepped in for Ince as the No. 1 right offensive tackle Saturday. Mason Richman was inserted as a starting guard. Of note, ’21 early-enrollee, Connor Colby of Cedar Rapids Kennedy, was lining up as a No. 2 OT.

Second-year freshman Lukas Van Ness stood out on the defensive line. He recorded an impressive tackle for loss. He spent a lot of time playing hockey growing up, but could be poised for a breakout with all of his attention now on football.

EYE-CATCHERS: Here are some of the student-athletes and position groups that caught my eye Saturday.

1. Tyrone Tracy Jr. – If I were handing out a player-of-the-day award, it would go to receiver from Indianapolis. He showed he can be an explosive playmaker capable of a big junior season.

2. Tight Ends – We knew about Sam LaPorta. He’s shown all-Big Ten potential during his first two seasons. Graduation the last two years, including Shawn Beyer from last year’s squad, left some question about who would step up behind him.

Luke Lachey, who was listed as the No. 2 on the depth chart last month, showed Saturday that he will factor into the equation. He hauled in a couple of balls in impressive fashion. Walk-on Bryce Schulte also caught multiple passes.

3. Caleb Shudak – Life after kicker Keith Duncan doesn’t have to be scary. Sixth-year senior Shudak is ready for his shot, as he showed Saturday. He possesses a big leg with accuracy.

4. Gavin Williams – The second-year running back from Central Iowa ripped off an impressive touchdown run. It highlighted a solid performance in a backfield where opportunities exist behind Goodson.

He might not see many defensive reps in a deep secondary, but he’ll provide quality depth and could be an important core special teams’ performer.