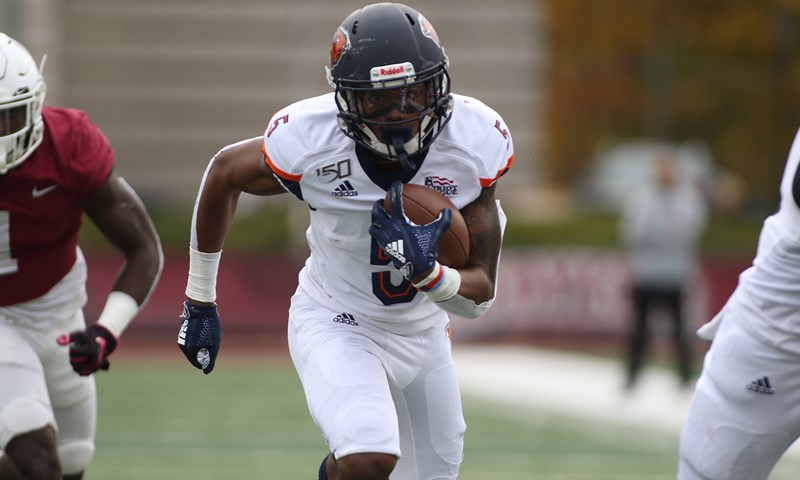 BETHLEHEM, Pa. – The 2021 Patriot League spring football season resumes on Saturday with a pair of crucial divisional matchups. Bucknell (1-0 PL, 1-0 South) travels to Lehigh (0-1 PL, 0-0 South) for a chance to clinch the South Division and earn a spot in the first Patriot League Football Championship Game. Doug Heater and Mike Yadush will have the call beginning at noon on ESPN+. Fordham (0-1 PL, 0-1 North) will host Colgate (0-1 PL, 0-0 North) in a North Division Game with Andrew Bogusch and Dominic Capone providing the call with live coverage on ESPN+ beginning at 4 p.m.

Patriot League Announces Football Schedule Adjustments
The Patriot League announced football schedule adjustments for the final two weekends to prioritize divisional games and determine North and South Division champions. This week, Lehigh now hosts Bucknell in a South Division game. Bucknell’s previously scheduled game at Holy Cross is cancelled, with the Crusaders now having a bye. Fordham welcomes Colgate, as previously scheduled. Lafayette will be out of action due to a positive COVID-19 test within the program’s Tier 1. The regular season will conclude on April 10, with Lafayette hosting Lehigh at Fisher Stadium in the 156th meeting of “The Rivalry” at 12:30 p.m. Fordham travels to Bucknell for a 1 p.m. kickoff. Colgate hosts Holy Cross in a North Division game beginning at 5 p.m. to conclude the regular season.

Patriot League 2021 Spring Football Season Explained
The Patriot League’s six football teams split into two three-team divisions for the 2021 spring season. Colgate, Fordham and Holy Cross play in the North Division. Bucknell, Lafayette and Lehigh play in the South Division. Teams will play each divisional opponent once. The League schedule will conclude on Saturday, April 17, with a championship game between the two division winners. The Georgetown football program will forgo participation in the spring 2021 season.

SERIES HISTORY: Lehigh and Bucknell meet for the 84th time in series history with the Mountain Hawks holding a 48-32-3 edge, including eight of the last 11 meetings. Bucknell won back-to-back meetings in 2013 and 2014. The series between the two programs began in 1888 in Bethlehem, Pa.

SERIES HISTORY: Colgate and Fordham meet for the 32nd time in series history with the Raiders holding a 24-7 advantage. Colgate is 7-3 against the Rams since 2010. The first meeting between the two programs came in 1989. Fordham’s last victory came in 2016.

Bucknell Looking to Clinch a Spot in the Title Game
Bucknell can clinch the South Division title and a spot in the first Patriot League Football Championship Game with a win at Lehigh on Saturday. The Bison defeated Lafayette, 38-13, on March 27. The Bison have not won the League since 1996.


ABOUT THE PATRIOT LEAGUE
The Patriot League is in its fourth decade of academic and athletic achievement, continually demonstrating that student-athletes can excel at both academics and athletics without sacrificing high standards. The Patriot League’s athletic success is achieved while its member institutions remain committed to its founding principle of admitting and graduating student-athletes that are academically representative of their class. Participation in athletics at Patriot League institutions is viewed as an important component of a well-rounded education.