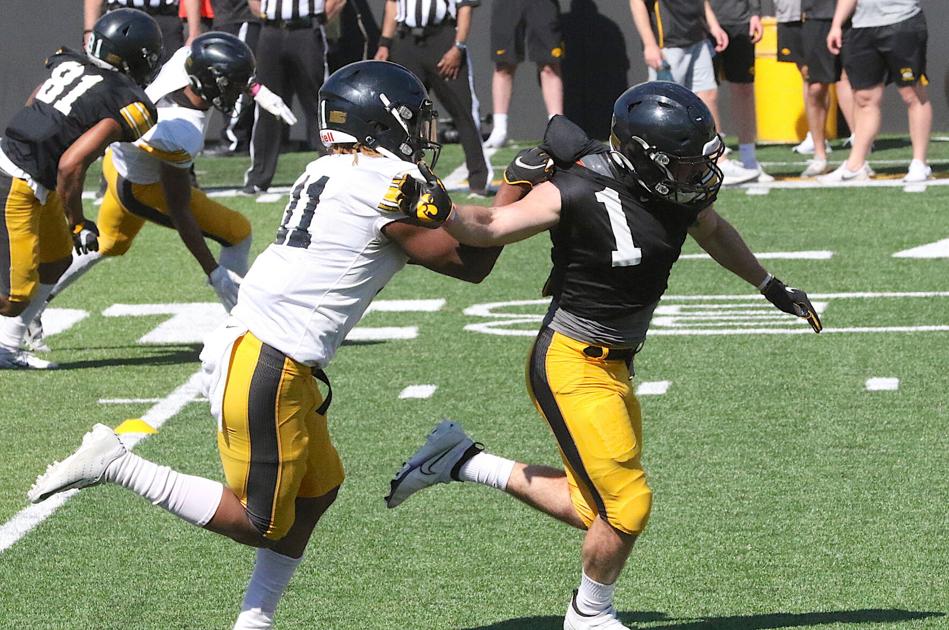 IOWA CITY, Iowa – Iowa Football opened up Kinnick Stadium for fans and media to watch practice twice this year. Since I started covering the team back in 1997, it marked the first time more than one workout was made public.

It was a great idea that I hope continues moving forward. It’s good for the fans, media and the players, some of whom are performing publicly for the first time in their college careers. It’s not 70,000 on a Fall Saturday, but it’s an experience.

It helped that both open practices this spring took place in a sun-soaked Kinnick. Saturday’s weather could have been bottled and sold for a fine sum.

The football played looked much like it had for the last two decades plus – a work in progress. It’s been a fool’s errand drawing conclusions from this time of year. The Hawkeyes’ Spring performance rarely, if ever, foreshadowed what we’ve seen in the Fall.

While judging what the ’21 squad will accomplish by watching four hours practice would be premature, analyzing what we saw in context is fair. Perspective is important.

Here are some of my thoughts and observations:

QB PLAY – Inconsistent is how I would label what I saw here. That could be said about most positions on the field this Spring, but fluctuations behind center are magnified.

This Iowa team possesses some really potent pieces. The secondary is among the best in the country as are the specialists. RB1, WR1 and TE1 are playmakers. If Iowa is going to get over the hump – a B1G West title – it needs a signal caller capable of winning big games.

It would be hard to say we saw that during the two open practices. Yes there were injuries at receiver and on the offensive line that affected production, but that didn’t explain away all the hiccups.

The quarterbacks do have summer workouts and training camp to improve chemistry, fundamentals and decision-making. Significant strides can be taken during these periods.

For me Spencer Petras heads into August as QB1 having shown the best handle on the offense and the most consistency this spring. I do think Alex Padilla is making up ground on him, however, and the competition could get interesting, especially with formidable foes Indiana and Iowa State the first two scheduled games.

Deuce Hogan showed up a distant third during the two open practices. The game has not slowed down for him yet, which makes sense since he’s received limited reps to date.

Pass-Catchers – Nico Ragaini missed both open practices and Tyrone Tracy sat out Saturday after shining a few weeks ago. The duo came into the Spring as Iowa’s two most accomplished receivers with a lot of unknowns behind them.

I’m not sure Spring workouts crystalized who will be the other contributors at the position. Veterans Charlie Jones and Max Cooper enjoyed a leg up based on experience. True freshman Keagan Johnson and Arland Bruce IV flashed potential, while Desmond Hutson looked better Saturday than he did on April 17. Quavon Matthews missed the weekend, and Diante Vines sat out two weeks ago.

Tracy and Ragaini are going to need some help as they will be marked men by opposing defenses. Iowa must pressure teams down the field to open things up for running back Tyler Goodson and tight end Sam LaPorta.

Backup RBs – I went into the Spring wondering about depth at running back. I came out of it feeling confident about it.

D-LINE IS FINE – After losing three starters from the defensive line for the third year in a row, it made sense wondering what that position would look like this Spring. Not only did I come away lacking concern, I think it could be a strength.

It’s fair to wonder if there will be a drop-off after last year’s starters Chauncey Golston and Daviyon Nixon were drafted this past weekend and another first-teamer, Jack Heflin, signed a NFL free agent contract. Based on what I saw the last few weeks, I don’t think regression will be significant.

Injuries – I’ve mentioned a few potentially key contributors who missed time for health concerns. Fortunately, it didn’t appear like anything was serious and a few guys showed progress between the two practices.

Projected starting offensive linemen Cody Ince and Justin Britt were among them. Ince was out of a walking boot and Britt was off crutches on Saturday after needing those aides on April 17.

On the downside, Jones went from a leg wrap in open practice No. 1 to crutches on Saturday. Second-year receiver Diante Vines returned to action while classmate Quavon Matthews was held out Saturday.

Walk-Ons – It’s smart to keep an eye on Iowa’s non-scholarship players in the Spring for insight into potential contributors. These guys often serve as quality depth and perform important roles as core special-teamers.

LSU Football: The disrespect for…