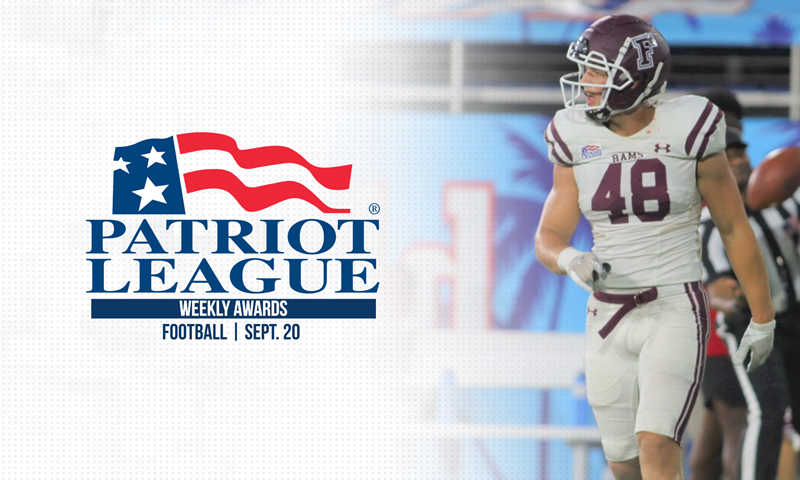 Holy Cross sophomore quarterback Matthew Sluka was named the Patriot League Football GEICO Offensive Player of the Week after rushing for two touchdowns in the Crusaders’ 20-17 win over Yale.

Holy Cross senior placekicker Derek Ng received Patriot League Football GEICO Special Teams Player of the Week after booting the game-winning field goal in Holy Cross’s victory over Yale. His 47-yard field goal with 48 seconds left in the game was the second time in his career that he connected on the game-winner against the Bulldogs.

Fordham freshman linebacker James Conway received Patriot League GEICO Rookie of the week honors for the second consecutive week after making 15 tackles, recovering a fumble and breaking up a pass against FAU.

The Patriot League football players of the week are selected in a vote by League media members and each school’s sports information directors, who are not eligible to vote for their student-athletes.

PATRIOT LEAGUE FOOTBALL OFFENSIVE PLAYER OF THE WEEK
Matthew Sluka, Holy Cross, So., QB, Locust Valley, N.Y./Kellenberg Memorial
*Sluka rushed for two touchdowns, netting 85 yards on 19 carries in Holy Cross’s 20-17 victory over Yale on Saturday.
*The sophomore quarterback also completed 7-of-13 passes for 80 yards in the Crusaders’ win.
*The defending Patriot League Rookie of the Year led a fourth-quarter drive to set up the game-winning field goal with 48 seconds remaining in the game.

PATRIOT LEAGUE FOOTBALL DEFENSIVE PLAYER OF THE WEEK
Jacob Dobbs, Holy Cross, Jr. LB, Macomb, Mich./De La Salle Collegiate *Greenhagen followed up his *Dobbs finished with 13 tackles, 4.0 TFLs and 2.0 sacks to help Holy Cross defeat Yale, 20-17.
*The junior linebacker recorded both of his sacks in the fourth quarter to help stall the Bulldogs’ offense in a tightly contested game.
*He has recorded double-digit tackles in each of the Crusaders’ three games this season and is one of 13 FCS student-athletes to record four or more TFLs in a single game this season.

PATRIOT LEAGUE FOOTBALL SPECIAL TEAMS PLAYER OF THE WEEK
Derek Ng, Holy Cross, Sr., PK, Las Vegas, Nev./Bishop Gorman
*Ng connected on a 47-yard field goal with 48 seconds remaining in the game to lift Holy Cross to a 20-17 victory over Yale on Saturday.
*The Las Vegas native went 2-for-3 on field goals and 2-for-2 on extra-points attempts to help the Crusaders improve to 2-1.
*His game-winning field goal against Yale is the second of his career against the Bulldogs. He made the overtime game-winner in a 31-28 win in 2018.

PATRIOT LEAGUE FOOTBALL ROOKIE OF THE WEEK
James Conway, Fordham, Fr., LB, Omaha, Neb./Millard West
*Conway finished with a career-high 15 tackles, one pass breakup and a fumble recovery in the Rams’ loss to FAU.
*He earned League rookie of the week for the second consecutive week after finishing behind teammate Ryan Greenhagen with 15 tackles, including eight solo tackles.
*The Omaha, Neb. native is seventh in the Patriot League, averaging 9.3 tackles per game.

Danny Meuser, Bucknell, So., RB, Dallas, Pa./Dallas
*Meuser rushed for a career-high 90 yards and his first collegiate touchdown on 21 carries in Bucknell’s loss to Penn on Saturday.

Michael Hayes, Lafayette, Fr., KR/RB, Sarasota, Fla./Riverview
*Hayes returned the game’s opening kickoff for a 93-yard touchdown against No. 23 New Hampshire. It was the Leopards’ first kickoff return for a touchdown since the 2018 season.

Marco Olivas, Lafayette, Jr., LB, Fort Worth, Texas/Fossil Ridge
*Olivas made a game-high 13 tackles, broke up two passes and had one quarterback hurry in Lafayette’s loss to No. 23 New Hampshire. Olivas and the Leopards’ defense held the Wildcats to 133 rushing yards.

ABOUT THE PATRIOT LEAGUE
The Patriot League is in its fourth decade of academic and athletic achievement, continually demonstrating that student-athlete can excel at both academics and athletics without sacrificing high standards. The Patriot League’s athletic success is achieved while its member institutions remain committed to its founding principle of admitting and graduating student-athletes that are academically representative of their class. Participation in athletics at Patriot League institutions is viewed as an important component of a well-rounded education.

What’s the identity of this…

Winners and losers from Week…